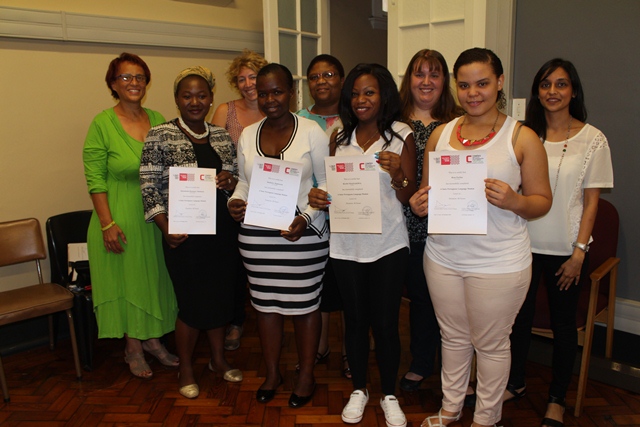 The first certificate presentation for the Faculty of Arts and Design students who successfully completed the Introductory Portuguese module was recently held at City Campus.

The occasion marked the celebration of five students successfully completing their Portuguese module and celebrating their achievements.

In preparation for the implementation of General Education by DUT, the Faculty of Arts and Design, in collaboration with the Instituto Camões ran a pilot project programme of the Introductory Portuguese module which was developed for General Education in the second semester of 2014. Students eagerly participated in this pilot project as an addition to their regular curriculum.

The Introductory Portuguese modules forms part of a pool of language electives that the Faculty of Arts and Design have designed as part of their General Education curriculum. These semester-long electives include Portuguese, IsiSulu, French and Mandarin, all aimed at introducing students to a new language and culture.

Rev. Dr Delysia Timm, Institutional General Education Co-ordinator, delivered an inspirational speech in which she highlighted the importance of general education in student development and placed emphasis on the role of the general education module and how it can improve in bridging the gap and language barrier amongst students from different backgrounds by learning different languages.

Tasneem Seedat, Faculty of Arts and Design General Education Co-ordinator, said the idea behind introducing language electives was to introduce students to a broader market that will allow them to be employable both nationally and internationally. “Our faculty modules are aimed at advancing critical citizenry, while giving students an edge that allows them to communicate within the world,” said Seedat.

The Facilitator, Juliana Rosa, said, “It was great to teach the pilot course. The faculty was very welcoming and the students were committed. I really enjoyed watching their progress and I have also learned so much from them. It was a great pleasure to teach at DUT.”

Students proudly received their certificates and many are now looking forward to learning many more different languages in the future. This year (2015) will see the role out of further FAD pilot modules with introductory French beginning this term.