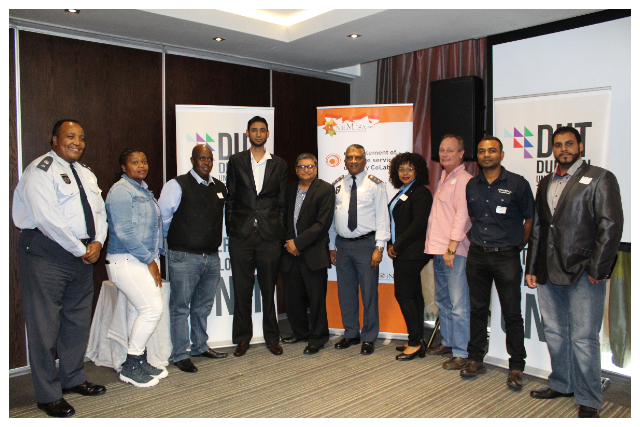 Media Monitoring and social media activism and the #fees must fall campaign was the main focus at the Media Monitoring, Big Data and Social Media engagement session which was held at The Coastlands Musgrave Hotel and Conference Centre on 28 May 2018.

In attendance were DUT staff, external stakeholders as well as key speakers, Dr Surendra Thakur-Director of the KZN e-skills CoLab, Tonya Khoury- Acumen Media, and DUT’s Master’s student Yaseen Khan.
These experts in their fields of research came together to share ideas and the latest information on social media activism, media monitoring as well the role of social media in obtaining information.

Welcoming the guest was Dr Thakur, who spoke on the on the appropriate use of social media and what happens in an internet minute in 2016. “Today, we enter into the digital realm to see what happens every minute on the internet. The statistics are mind-boggling and put in perspective how scalable platforms have taken over the world. That’s a lot of data every minute, and this volume of information is part of the reason that these same companies are prioritising the ability to process and interpret big data more than ever before,” he said.

He also shared some handy tips on the do’s and don’ts of online communication, be it via email, social media or when surfing the internet.

Yaseen Khan, a Master’s student at DUT, gave his presentation the recent # FeesMustFall campaign which drew a lot of attention from government, society and media. He spoke on the origin of the #FeesMustFall campaign as well as the negatives and the positives of the campaign.

“The negatives of the campaign are that the protests turned violent, students were arrested, academic programmes were suspended and Government were pressurised into prioritising education fees and addressing unrests at universities. The positives from the campaign were 0% increase in fees for 2016, a Commission of Enquiry ordered by the former President, Jacob Zuma to address the prospect of free- free education,” he said.
He also spoke on social media’s role and impact and in particularly Twitter which seemed to have amplified the #FeesMustFallmovement.

“Marches and rallies were orchestrated through social media platforms such as Twitter. Businesses already spend millions on Social Media Analytics. Twitter generated a lot of tweets (data) using the hashtag #FeesMustFall. The question that arises is: Given the digital age we live in, and the frequency of electronic social behaviour exerted, can we not make use of social media data and apply analytics that can provide insights into public opinion, detect its trends, weed out bots and possibly even be able to apply predictive models that may be used to prevent or promptly deal with events such as #FeesMustFall,” he said. His research was given recognition in South Africa in Parliament recently, as well.

Next is to discover the content and trends driving the conversations. Analyse data in real-time using advanced analytics, compare your brand with industry powers, measure the performance of your brand; and most of all, saving time and using predefined and customisable reports as well as integrate and activate insights throughout the enterprise,” she said. She added that her love for media monitoring is what drives her to be for 23 years industry and source information The session ended with a Q and A session, further discussing the role of social media in today’s society.

Pictured: Dr Surendra Thakur with delegates at the event.