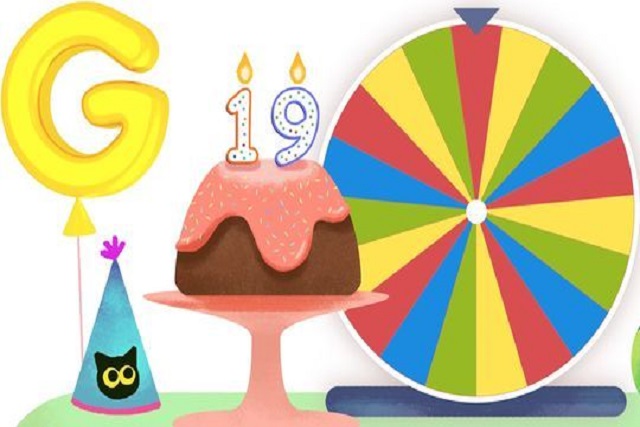 Google turned 19 recently,  To celebrate, Google did what it always does. It created a Doodle. This time they created a birthday surprise spinner (shown in picture) which transport you back in time and play the 19 best arcade games ever. If you don’t know what a Doodle is, indulge me and visit https://www.google.com/doodles. I wonder what effect Google has on us?

It turns out there really is a Google Effect. Google “Google Effect” to see what I mean. The Google effect, also known as digital amnesia, is the tendency to forget information that one can easily find online by using Internet search engines such as Google. People are less likely to remember certain details they believe will be accessible online. My mother calls this laziness. I guess Google did make us lazy and forgetful. It did, however, make us so much smarter as well.

Google contributed to its own (and our success) by leveraging the so-called Network Effect. Prof Varian, ICT Dean at UCLA, Berkeley championed that the network effect as the notion that a technology based on connectedness grows increasingly compelling and more valuable as more folk use it.

The classic example is the telephone, where the greater the number of users the greater the value to each user. The Internet is an even better example. Initially, there were few users of the internet, with little value to anyone outside its little network. And now? Imagine if we used the network effect to create a nation of skilled citizens? All our relative benefit will increase!

The Hawthorne Effect is where individuals change or even improve an aspect of their behavior in response to their awareness of being observed. The novelty of the attention as research subjects even temporary increases in workers’ productivity. That’s what we need for national growth – a long dose of the Hawthorne effect to achieve the Network Effect. Will this, on the other hand, fuel an Orwellian effect?

I know the effect that Barbara Streisand had on me as a hormone infested teenager. And I adored her music. The way we were. Now there is an effect named after her. The Streisand Effect refers to the unintended consequence of further publicizing information when trying to hide or censor it. Instead of successfully removing the information from the public, it draws attention, becomes viral, mostly as a backlash against the censorship attempt. Streisand had objected to a large-scale California coastline photography project to document erosion which included her property. Being intensely private, she filed an invasion of privacy suit. And everybody started sharing pictures of her house. And she lost. The Streisand effect, to my mind, much like her nose is rather counter-intuitive.

Deputy President Ramaphosa well understood the Streisand Effect and did not lodge a complaint with the Inspector General about the alleged email leaks. He kept quiet. The result? The story died. Did I tell you the story hiding things in plain sight? Now, here is a fireside story for another day…

Have you heard of the Butterfly Effect? Meteorologist, Edward Norton Lorenz espouses the notion that small causes eventually generate large effects. Can the flap of a butterfly’s wings ultimately cause a tornado? Consider that the Scientific American has published that wind turbines in Europe are now causing an unintended impact on climate. This includes more and even less rain, as well as lower and even higher temperatures.

I am alluding to the point that actions have consequence. What if we all flapped for South Africa even with short skills programme – as a start – that will empower and equip folk? Do you have an idea or innovation? Now that may well create an appropriate effect. May I suggest we flap for my beloved Buccaneers though alas miracles are not part of my digital world, is it? This digital world is just 1 and 0’s. Like, 1-0, the soccer score the Clever Boys beat us by. Sigh. Let’s rather pray for them.

Mandelbrot is my favourite person in the whole galaxy. Google Mandelbrot set, click images and you will understand why. Mandelbrot, in his first job at IBM, was tasked with figuring out how noise in communications lines arose in order to identify ways of minimizing it. He made a bewildering observation that there was not one type of effect at play but two. The first effect, he named Joseph Effect after the biblical story about seven good years and seven bad years. This effect is continuous and predictable. The second effect, which he termed Noah Effect which was chaotic and unpredictable after the biblical story of that deluge. I will save the Noah Effect discussion for a rainy day.

Google leveraged the Joseph Effect to drive adoption of Gmail, a new email service that Google launched, in 2004, with an offer few could refuse – 1GB of free storage! That didn’t just one-up the competition, it annihilated them! Remember Hotmail and Yahoo offered a miserly 2MB-4MB at the time. It was disruptive and we remain the beneficiaries.

Google completely changed email storage because it understood Joseph effects. With very few email users, 1GB of storage would cost Google’s competition much more to match the offering. Google understood at the same time, that storage costs were decreasing rapidly and that by the time its user base grew comparatively, 1GB of storage would be economically feasible. Science is simply everywhere. And fun.

The Trump Effect is all about various things like hand sizes, crowd sizes, and mythical walls. It even made rich sportsmen kneel. As I write only on digital matters and this becomes your next homework: Google Trump Effect – it is real and very interesting reading.

Now, why did I write this? This digital amnesia is getting real. Ah yes, I just wanted to say “Happy Birthday Google!”