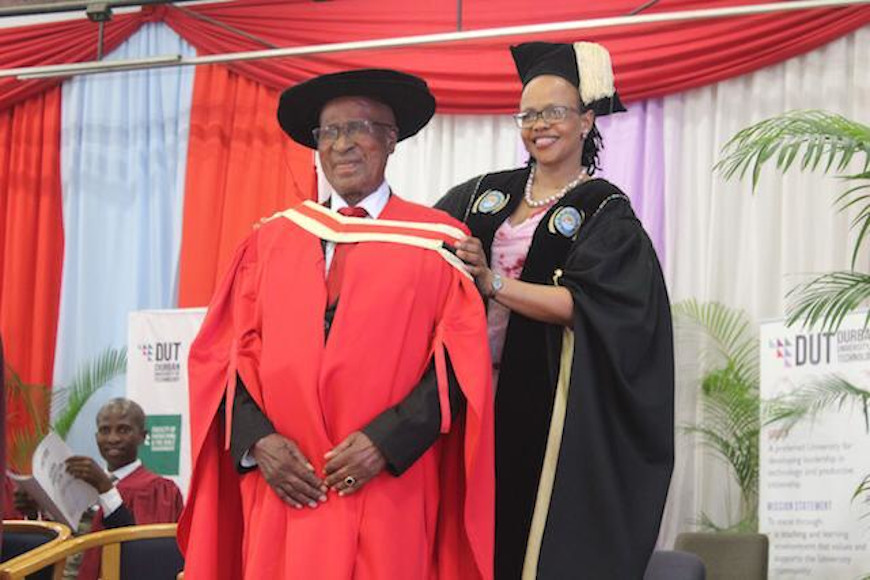 The Durban University of Technology is extremely sad to learn that struggle stalwart, liberation fighter and former Member of Parliament, Dr Andrew Mekete Mlangeni, has passed on. We convey our most sincere condolences to his family, friends and comrades.

Dr Mlangeni was a DUT Alumnus. He was conferred with an honorary Doctorate of Education from our Faculty of Arts and Design in April 2018. The ceremony was held in the FJ Sithole Hall on the Indumiso campus in Pietermaritzburg. The Executive Dean in the Faculty of Arts and Design, Dr Rene Smith said: “The Faculty of Arts and Design mourns the passing of uBaba Mlangeni. He lived a life of purpose, committed to ideals which he stayed true to – until the end. To honour his legacy, we must imbibe the values which he lived and fought for. His commitment to social justice and to education should be a beacon of hope for us – at a time when we so desperately need it.”

His immense contribution to the liberation of South Africa was well documented, as he was harassed and imprisoned for standing up against the might of the apartheid government. He was sentenced to life imprisonment following the infamous Rivonia Treason Trial. He would go on to spend 26 years in jail on Robben Island.

Dr Mlangeni was the only son and the 9th child born to parents who worked as farm labourers under the racist labour tenancy system. Like many children of his time, Dr Mlangeni had no choice but to be a farm labourer. Following the death of his father, it meant that the family had to move out of the farm. And so, Dr Mlangeni, at the age of 12, was forced to give up on his education and sought work in order to help support his mother and his family.

As a bus driver, he became involved in a strike for better working conditions and a living wage. This led to him joining the ANCYL from where he rose to eventually become a dedicated and loyal stalwart of the ANC, for which he has received many community and government accolades.
During the Congress of the People, Dr Mlangeni was a branch delegate at Kliptown and he was one of the six-member group, hand-picked, to undergo the first ANC military training in China in 1962, even before the formation of Umkhonto we Sizwe. He was arrested on his return to South Africa in 1963 for recruiting and training an armed force.

Dr Mlangeni, like many other political prisoners, was determined not to let imprisonment get the better of him. From the beginning, the political prisoners fought for the right to educate themselves further, which was eventually granted in 1967. Dr Mlangeni was the first person to register to study, after being denied that right as a child because of poverty and racism. He came out of prison with two degrees and remained passionate about education as the key to change.

He received the Presidential Order for Meritorious Service: Class 1: Gold, from former President Nelson Mandela in 1999.

The Durban University of Technology was honoured to have welcomed Dr Mlangeni into our family in 2018. We join the nation in mourning the passing of this great soul…

Pictured: Former Registrar Professor Thenjiwe Meyiwa with Dr Andrew Mlangeni during his graduation for his honorary Doctorate in Education in 2018 at the FJ Sithole Hall, Imbali, Pietermaritzburg.