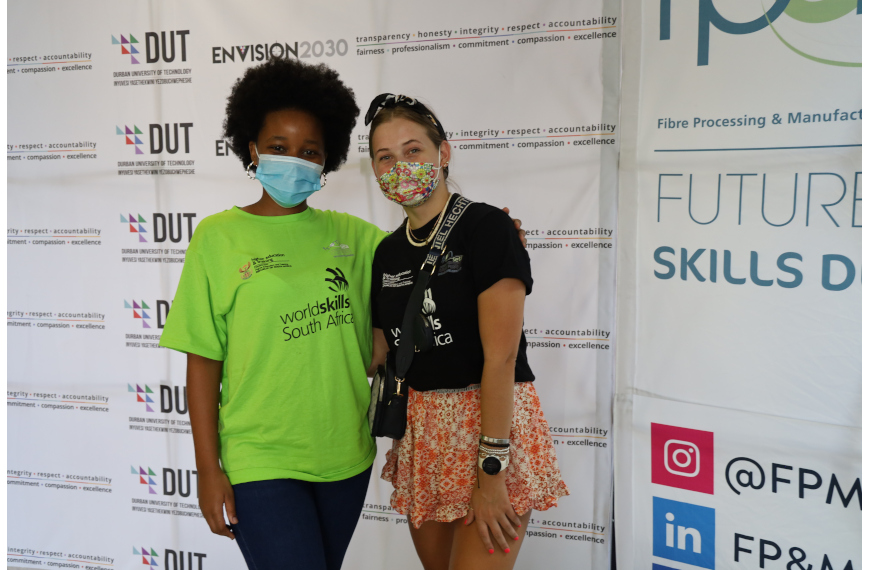 Two Durban University of Technology (DUT) Fashion and Textiles students have stitched their way into the top six and will be competing in the National World Skills Fashion Technology Competition in September 2022.

The announcement of the top six finalists was made at the three-day regional World Skills Fashion Technology Competition which was held at the DUT Brickfield Campus from Friday, 04 March 2022 to Sunday, 06 March 2022 and third year Julia Whitby along with second-year Sibahle Simamane will represent the University at the finals. The competition was made possible by the Fibre Processing and Manufacturing (FP&M) SETA in partnership with the Department of Higher Education and Technology (DHET), World Skills South Africa and the DUT.

The judges were WorldSkills national expert and WSU lecturer, Mr Archibald Monyepao, DUT lecturer, Ms Nomonde Peter and Tshwane North College lecturer, Ms Bulela Dumzela. The test project consisted of four modules comprising of pattern-making and lay-up, technical drawing, draping and garment construction. Competitors were required to submit each module at the end of the maximum time indicated for that module; irrespective of whether the competitor was complete or incomplete.

The overall project brief guidelines were that the 13 students were tasked to create a ladies’ skirt pattern from a mystery design randomly chosen, using the measurements given, lay skirt patterns on fabric efficiently, draw a technical drawing of the dress provided, drape on the dress form/ mannequin (using pins only) to copy a provided ‘mystery’ image that was given to students.

They also had to use the skirt pattern drafted to cut and construct (sew) the final product, using the various industrial machines in the studio efficiently, and finish some parts of the garment with hand sewing.

“I’m really humbled to be selected as the first runner-up in KwaZulu-Natal. I’m also a bit nervous of what’s to come in the Nationals. There is a lot of pressure on us right now during this competition but I am really positive that we (including the second runner-up) can win and we are capable of doing this. Also, we were not even competing against each other, I think our greatest competition was time, time was against us. It wasn’t difficult as we had our lecturers for support and it was nice to get to know the other participants from the other two provinces,” said Simamane.

Also, to represent DUT in the Nationals, is third- year Fashion and Textiles student, Whitby. “It was such a nice experience to be able to compete in the regional World Skills competition and I can’t wait to go to the National World Skills Fashion Technology Competition.  I think DUT got us prepared well enough so that we were able to cope under pressure and showcase our skills to the best of our abilities,” explained Whitby.

Commenting on the competition, DUT Fashion lecturer who was part of the three experts judging the competition, Ms Nomonde Peter thanked the DHET for affording DUT the opportunity to participate in the World Skills Competition. She extended a special thanks to the CEO of the FP&M Seta, Dr Felleng Yende for funding this competition.

“With us, DUT, hosting this competition has been an excitement. I must say, it was stressful and not easy but the students were amazing. We are very happy to have such champions who showed dedication, perseverance right through. The top six going to the Nationals, we are happy as DUT to have two of our students who will be representing us in the National World Skills Fashion Technology Competition. These students worked really hard under a lot of pressure, I am so proud of them,” said Ms Peter.

Director of World Skills South Africa, Mr Mike Mashinini expressed his appreciation to the fashion experts, house keepers and technical support for their commitment in making the competition a success.

“I would like to thank all the partners, the Department of Higher Education and Training for their wonderful work in terms of world skills under the leadership of Director of World Skills, Mr Mike Mashinini. I would also like to put on record our gratitude and sincere thanks to the CEO FP&M seta, Dr Felleng Yende. When Dr Yende went to Russia, she noticed that there were fashion technology competitions that were taking place and she always wondered why South Africans were not participating in the competition. Yet we have some of the best fashion designers in the world, if you look at the likes of Mr David Tlale, Thula Sindi, we know that they perform on the catwalks of Milan, New York, Germany and Berlin. So, we knew that top skills were in in South Africa,” said FP&M Seta General Manager, Mr Poollendren Naicker.

WorldSkills national expert and WSU lecturer, Mr Monyepao said that the competition was set at a high level and the time frame was very short and that had led to the pressure that truly came with the competitio

“At the end of the day, all students pulled through to the end and were determined to actually show off their skills, it was worth the while even though it was intense,” he said.

South Africa is one of 74 countries affiliated to the World Skills International (WSI).

Pictured: DUT Fashion and Textiles students Sibahle Simamane and Julia Whitby have stitched their way into the top six and will be competing in the National World Skills Fashion Technology Competition in September 2022.