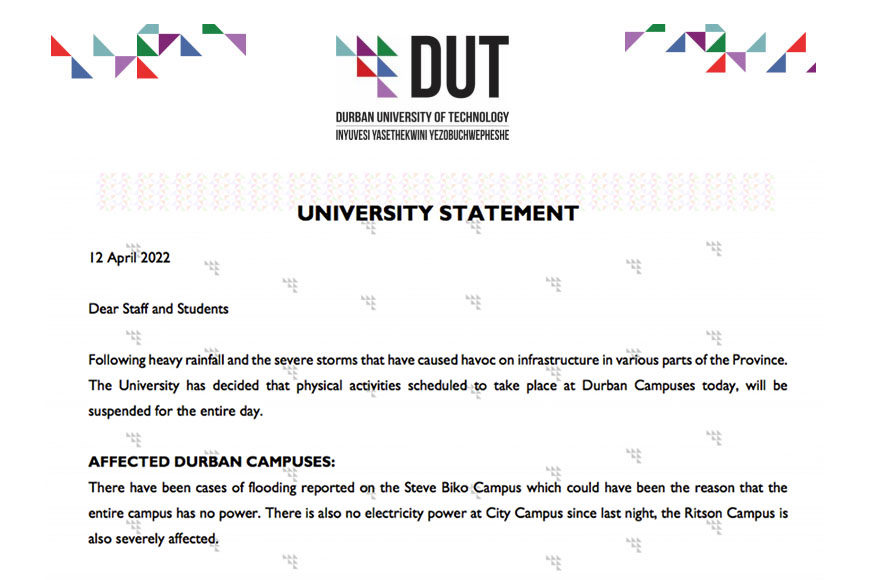 Following heavy rainfall and the severe storms that have caused havoc on infrastructure in various parts of the Province. The University has decided that physical activities scheduled to take place at Durban Campuses today, will be suspended for the entire day.

AFFECTED DURBAN CAMPUSES:
There have been cases of flooding reported on the Steve Biko Campus which could have been the reason that the entire campus has no power. There is also no electricity power at City Campus since last night, the Ritson Campus is also severely affected.

There is also a power outage at Open House in Durban, Card Production office in Durban and assessment venues located at Steve Biko Campus.

MIDLANDS CAMPUSES
Although there have been minor issues caused by bad weather at the two Midlands Campuses (iNdumiso and Riverside) both campuses will remain open and all physical activities will continue as planned for today.

Staff and students at the affected Durban campuses are encouraged to work virtually during this period and avoid travelling during this bad weather. Should the situation get better, DUT staff and students on the Durban Campuses will be updated using the official University communication platforms.