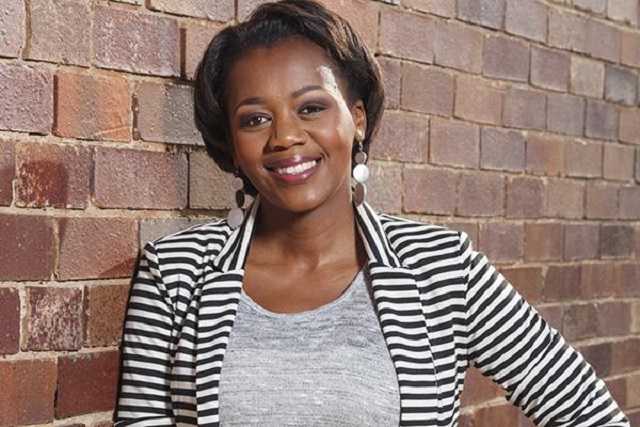 The series tells the story of a young teacher who gets involved in pyramid schemes. It was inspired by real life events, now known as the infamous pyramid schemes.
“Viewers can expect to see a reflection of our country. People are barely making it and are financially desperate so they find themselves roped into a lot of pyramid schemes camouflaged as investment clubs,” said Zondi.

The Hammersdale born actress, who recently tied the knot in a traditional wedding, will be playing the role of a wife and mother called Khosi.
She explains her character, “Khosi is a teacher who loves the simple life until she gets lured into a pyramid scheme because her family lands in debt. She gets caught up and lost herself to a point of neglecting her family and having an affair. Khosi is a strong, resilient woman who has her heart in the right place but greed gets the better of her,” she said.

Zondi will be starring alongside the country’s veteran talents such as Jerry Phele and Connie Chiume. The trio will be joined by an ensemble cast of Tinah Mnumzana, Don Mosenye, Noxee Maqashalala, Thabo Malema, Paballo Khoza, Sive Mabuya and Austin Shandu.

The lead actress is grateful for the amazing opportunity as it has helped her grow as an actress, however she did face a few challenges.
“The challenges I faced were shooting 26 episodes in 44 days. It meant a lot of scenes in a day. Also, having that many adult scenes were a little too much me at times,” she added.
She encourages drama students to see every job as an opportunity to grow into new heights.

“The possibilities are endless. The industry awaits your talent, but remember it may not be easy,” said Zondi.
Easy Money will premiere on Tuesday, 12 September 2017 at 9.30pm on eTV.
Pictured: Former DUT Drama student Xoli Zondi, has a show starting on Etv, next week Tuesday.