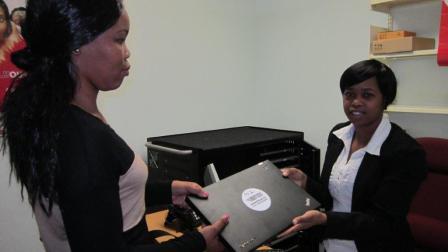 In a bid to alleviate the current shortage of computer facilities and enhance learning, the DUT Student Representative Council (SRC) in partnership with the DUT Library recently donated laptops to all the University libraries.

The initiative is the brainchild of the 2011 and 2012 SRC leadership and has received a lot of praise from students.

SRC Administrator Nombali Ntoza said the objective was to give back to the DUT student population and support them academically. “The SRC of 2011 and 2012 bought 100 laptops to support the students. We also wanted to adhere to our name as (a) university of technology,” she said.

Library Manager: Academic Services Shirlene Neerputh said the laptops have helped reduce the long queues of students who come to book to use computers. “These laptops are helpful for students because they can access the internet and WIFI,” she said.

The laptops are available for loan at all DUT libraries. The ML Sultan Campus and Steve Biko Campus have 30 laptops while the other libraries have five. Students who have a valid student card and do not have outstanding library fines are allowed to use laptops for two hours. At the event of exceeding the allocated time, students are then issued fines.

Thula Shangase, a third-year Operations Management student, commended this initiative saying it has been very helpful for him. “These laptops are very helpful; I use them to do research, type assignments and check my emails. Previously, I relied on the library’s computers but it was difficult for me to do my work because these were on high demand. I am glad because there is an alternative now- I just wish they could extend the time of using the laptops,” he said.

Caption: Many DUT students are benefiting from the donation of laptops recently made by the institution’s Student Representative Council.