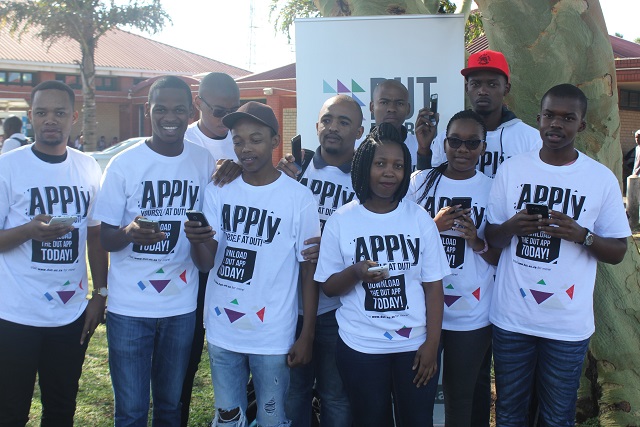 The Durban University of Technology officially launched its new mobile App during its first leg of the #DUTApp roadshows that commenced today (Thursday, 18 May 2017).

The App roadshows will be held at all DUT campuses. The first part of the promotion of the #DUTApp will take place on Thursday and Friday (18 and 19 May 2017) on the Ritson and Steve Biko Campus in Durban. Then on Monday, 22 May 2017, the launch roadshow will move to the City and Brickfield Campus in Durban. Finally, the last day of the #DUTApp roadshow will be in Pietermaritzburg at both DUT Midlands Campuses (Indumiso and Riverside Campus).

During the launch of the App, students can win lots of prizes. DUT students and the entire DUT community are urged to take a screenshot loading their download and their profile details and when the App is fully downloaded, they must email everything to noxolom@dut.ac.za or KareeshmaG@dut.ac.za – to stand a chance of winning laptops, mobile tablet and phones.

DUT Senior Director of Corporate Affairs, Alan Khan said the launch was “an exciting opportunity for DUT to engage with our students and staff. It places DUT on mobile phones and tablet devices anywhere in the world. This updated DUT App was developed by Wisolve, a group of very talented, innovative and inspiring DUT students and I am thrilled that what started off as a project on a page last year has finally resulted in a product that shows the strong entrepreneurial skills of our students who were part of the DUT Invotech enterprise.”

The DUT App is available as a free download for Android users on Google Play and via the Apple App Store for iOS devices.

For more details on the competitions and prizes to be won, students and the DUT community are urged to join the Communications Department at one of the roadshows.

Dates, Times and Venues of Roadshows:

Pictured: Students who successfully downloaded the DutApp at Ritson Campus