DUT DONORS HONOURED FOR IMPROVING THE LIVES OF THE STUDENTS

DUT DONORS HONOURED FOR IMPROVING THE LIVES OF THE STUDENTS 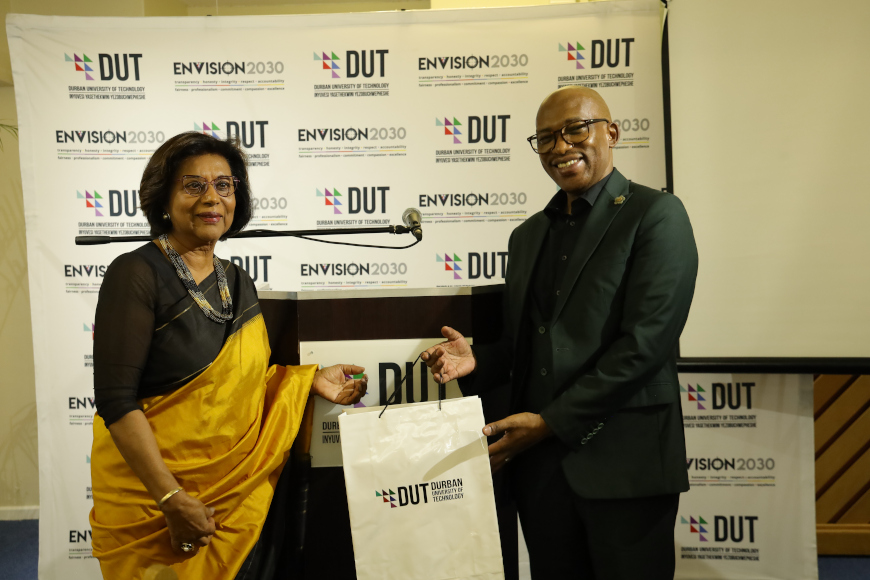 The Advancement and Alumni Relations office at the Durban University of Technology (DUT) hosted the Donor Recognition event at the DUT Hotel School, Ritson Campus on Friday, 11 November 2022. The university donors were acknowledged and appreciated for their efforts in making a difference in the lives of the students.

The programme director was the Advancement and Alumni Relations Director, Mr Zwakele Ngubane who began by expressing his gratitude to all the DUT donors for all the wonderful contributions and support over the years.

Gracing the event was the DUT Vice-Chancellor and Principal Professor Thandwa Mthembu, whom shared the table with some of the esteemed donors, Dr Devi Rajab, Trustee of Jonsson Foundation, who was the keynote speaker, Dr Mahmoud Youssef Baker, Iqraa Trust Chairperson and Mr Bishen Singh, DUT Council Chair of Finance.

In his welcome address, DUT Vice-chancellor and Principal, Professor Thandwa Mthembu acknowledged the donors and philanthropists for making the life of a DUT student and the staff, easier.

“We are able to do so much with the support they give to us. We know that there is legislation that encourages the private sector, trusts and many other organisations to put aside some fund as part of their corporate social responsibility. But, as we all know there are many organisations in our society that require a lot of help. We cannot take it for granted that we, as the Durban University of Technology deserve anything from all of our donors. We really appreciate that there is something that you may have seen or discovered in what DUT is trying to pursue, that makes it worthwhile for you to make the donations,” noted Prof Mthembu.

He further encouraged the DUT alumni to give back to the university and donate funds to DUT in its vision of improving lives and livelihoods. Prof Mthembu said they (DUT alumni) should do this from the goodness of their hearts without expecting anything in return.

Dr Rajab’s keynote address was based on the importance of philanthropic giving. She gave a brief background on the establishment of DUT, which was known as ML Sultan after a philanthropist, the late Mr ML Sultan formed a family trust in 1945, to develop a technical education within the constraints of the apartheid racial policy. She revealed that he gave a donation of 12 500 pounds which was a sizeable amount he gave to the Council where six hectors of land in the Curries Fountain was allocated.

“He gave whatever he had to the trust and called upon relatives and friends to join him in making this sacrifice. Educational philanthropy saw its early roots amongst the invention people, in the building of schools, hospitals and religious institutions where vernacular education took place alongside western education. Education philanthropy is a vital ingredient in the production or the development of a prosperous nation. Without education, society stagnate and people perish,” said Dr Rajab.

She spoke at length about the importance of giving and encouraged the guests to start making a difference in their surroundings.

A postgraduate student in Business and Information Management at DUT, Mr Malusi Nxumalo who is a bursary recipient spoke on behalf of all the students who managed to further their studies through the funding raised by the donors. He thanked the donors for their generosity and for giving students with disadvantaged backgrounds an opportunity to make their dreams come true and improve their lives for the better. He volunteered his services to the donors to assist them in their organisations since he is currently unemployed. Nxumalo said this will be his way of showing his appreciation and to practise the spirit of Ubuntu. For a young man from Nkandla, a village in north of KwaZulu-Natal going to university seemed unrealistic, however, the donors have made it possible for him.

The various donors from outside of the university and also internally were presented with certificates of appreciation.

The Acting Deputy Vice-Chancellor, Research, Innovation and Engagement, Professor Keolebogile Motaung, delivered the vote of thanks. She expressed how DUT values the support of the donors and the impact they have made in the students’ lives. She pleaded that they continue supporting DUT and changing lives.