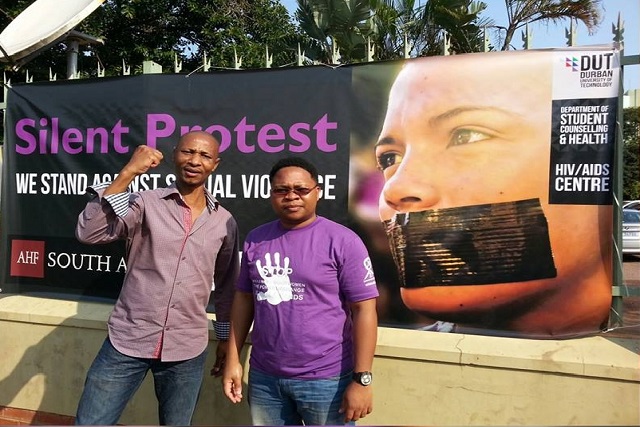 DUT bid farewell to its Health Promoter and HIV/AIDS activist, Oziel Mdletshe, in an emotional celebration on Monday, 29 February 2016.

“My time at DUT has formed part of my inspiration,” said Mdletshe who has served the University from 1999. “I draw inspiration from not only the community surrounding me but from DUT graduates who had been part of the HIV/AIDS support group,” said Mdletshe.

For many years, Mdletshe has played a major role in helping those infected and affected by HIV/AIDS. Mdletshe has conducted workshops, presentations, motivational talks which led to formation of support groups in areas such as Cator Manor, Adams, Folweni, KwaMakhutha and other Durban surrounding areas.

“One of my greatest achievements is the ‘Graduate Alive’ project which tells a good story about my journey at the university. More than anything, I am living DUT alive,” he said.

Through Mdletshe’s commitment and passion in assisting people infected and affected by HIV/AIDS, DUT became one of the first universities to have formal support groups for students living with HIV/AIDS in the country.

Honouring Mdletshe, Dr Euvette Taylor from DUT’s Student Counselling and Health, thanked Mdletshe for his dedication to the students of DUT. “Mdletshe’s vivid and charismatic voice will be memorable. Our country lacks heroes and the DUT community was very lucky to have him as part of the family. We thank him for all his dedication,” said Dr Taylor.

Mdletshe’s other programs include the Mayihlome programme which is now known as Peer Education at DUT. Graduate Alive was formed through Mayihlome. Mdletshe has also worked as Project Co-ordinator in a 2004 US exchange programme where he represented South Africa on issues of HIV prevention and treatment. He has lectured in different institutions in Washington DC, Los Angeles, Memphis Teens, New Mexico, Baltimore and New York.  In 2006 and 2007, Mdletshe wrote various articles in the Informer National Newspaper, where he addressed issues facing youth when it comes to HIV/AIDS.

DUT HIV/AIDS Centre Manager, Thobile Zulu, said the department will not be the same without the work that Mdletshe contributed. “I’m still in awe that he (Mdletshe) is leaving us. However, I wish him the best in his future endeavours and may he continue to inspire generations to come. His work and contributions at DUT are immensely appreciated,” she said.

Pictured: Oziel Mdletshe and Dr Euvette Taylor during the Silent Protest in August 2015.