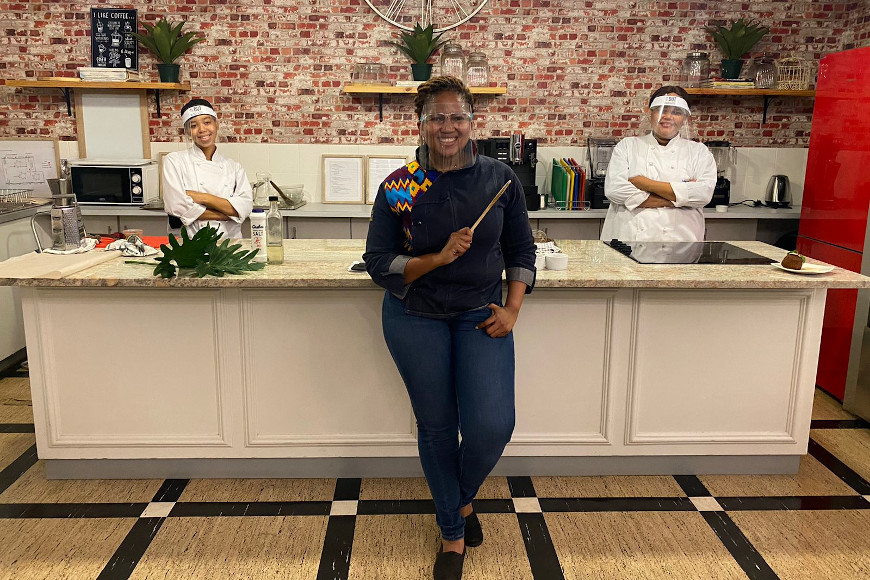 Third year and Advanced Diploma students in the Department of Food and Nutrition were involved in an international Cook Along showcasing South African cuisine as part of a three-day Foodture International Collaboration Workshop.

The livestreamed event took place on 20 April 2021, at 17:30pm from the Rendezvous restaurant, based at the Steve Biko campus.

Giving more input on the event, Dr Ashika Naicker from the Department of Food and Nutrition Consumer Sciences said: “Since 2017, international co-creation weeks have been organised by the joined forces of AP University of Applied Sciences and Arts Antwerp and the Hague University of Applied Sciences. Participants (students and lecturers), in the international co-creation week, came from nutrition related programmes all over Europe and the world,” she said.

DUT was invited to this event as the Department of Food and Nutrition which partnered with The Hague University of Applied Sciences for two COIL projects in 2019 and 2020.

The Third year and Advanced Diploma Food and Nutrition students participated in this event under the mentorship of Mrs Evonne Singh and Dr Ashika Naicker. The students were Lungi Nhlanhla (host),

Dr Naicker said that the many online meetings and planning culminated in a livestreamed event on 20 April 2021.

“DUT students prepared a main course: Chicken Dust Fillets, Spicy Chakalaka, Pap with Mfino and a dessert: Malva pudding with Rooibos infused sauce.  Recipes and a shopping list were uploaded a week before on the Foodture site so that participants could buy ingredients for the cook along. Participants around the globe cooked along with our students getting a taste of South African cuisine whilst DUT students behind the scenes were responsible for the streaming under the guidance of Audio Visual’s Morgen Kisten,” she said.

Host of the food event, Food and Nutrition Consumer Sciences student, Lungi Nhlanhla, and former Masterchef contestant, was elated to be the host of the livestream Cook Along.

“It was brilliant, talking to a live audience, it was as an experience like never before. It was amazing to be connected to people allowed the world and being able to share our authentic South African cuisine.  What I loved about our recipes which were cooked, is that it was simple food, delicious South African food, and anyone can make it and its affordable,” she said.

She also said that if given the opportunity she would love to play host again at such events.

Dr Naicker expressed her elation with DUT’s first successful Cook Along, saying that it was truly a proud moment to see how the students handled the event professionally and flew the DUT, and the South African flag high.

“This event would not have been possible without the third year and Advanced Diploma students’ involvement. They attended many meetings with the international students, selected the recipes and committed time for the dry run and the actual event,” she said.

“Congratulations to all participants. Mrs Evonne Singh who played a key role in driving the event. Thank you for always having foresight and for your drive,” said Dr Naicker.