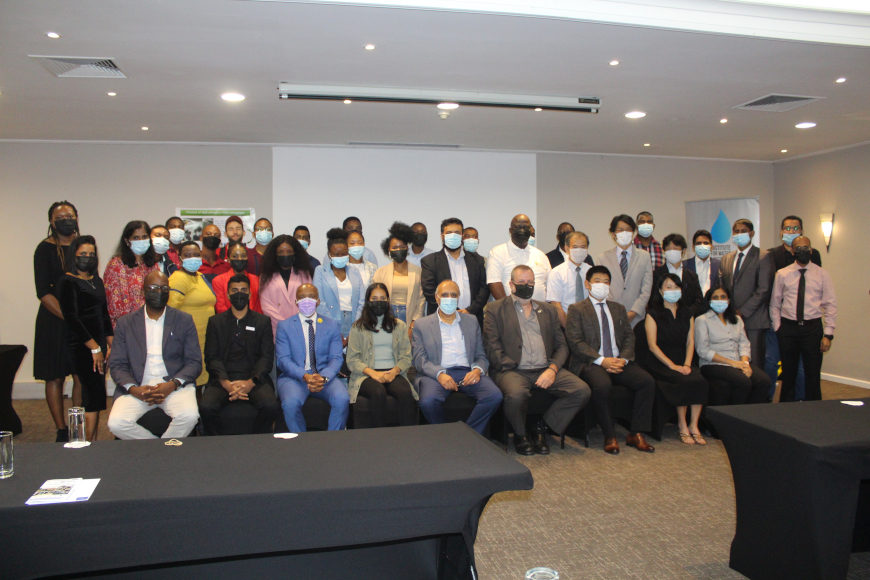 The development of a cost-effective process for the production of biofuels from microalgae as a step towards commercialisation for the renewable energy industry was the focal point of the SATREPS “Production of biofuels from algae biomass” Technology Transfer hybrid workshop, which was held at the Protea Hotel by Marriot Karridene Beach, last Thursday, 17 March 2022.

The hybrid workshop was hosted by the Japan International Cooperation Agency (JICA) and the Institute for Water and Wastewater Technology (IWWT), which is under the helm of IWWT’s Director, Prof Faizal Bux, at the Durban University of Technology (DUT).

“As you know, one of the greatest threats to humanity today is climate change, and researchers at the university have focused on finding optimal processes for the production of biofuels from microalgae as a step towards commercialisation under the development of the renewable energy industry. So that is very important for us to be aware of (this) as a country, from the results obtained we have optimised the yield of microalgae biomass using wastewater as a substrate as well as implemented a low-cost algae harvesting technology amongst others at outcomes,” she said.

Prof Moyo further commented that the project has contributed further to training of young and emerging researchers which includes Masters and Doctoral students.

“It has contributed to the university high impact outputs and also its rankings,” she said.

She wished all the participants all the best for the workshop, and thanked JICA, JST, DSI, the DUT, Institute for Water and Wastewater Technology, all the researchers and students who had contributed to making sure the project is a success as well as all DUT’s partners.

Adding to the conversation was JICA’s Mr Homma who congratulated the Technology Transfer workshop for the project of the production of biofuels using algal biomass.

“This is our collaboration between Japanese researchers and the South African researchers through the SATREPS project, and we have come to the end of our activity and I’m very happy that we have achieved our goal and we can share the results to the people concerned. This project continued through the COVID time and I would like to express my appreciation to all the researchers involved in this project who have overcome these difficulties,” he said.

Prof Bux gave a brief overview of the project indicating that the project is on production of biofuels using algal biomass.

“We started working in the field of algal biotechnology over 15 years ago, and we are fortunate that we partnered with our Japanese colleagues and this project commenced in 2016. The goal of the project was to develop a cost-effective process to produce biofuels from microalgae as a step towards commercialisation and the development of a renewable energy industry. The objectives of this joint research were to investigate and recommend a solution to increased algal lipid accumulation, harvesting of biomass, extraction of oil, tertiary treatment of domestic wastewater effluent, application of algal residue and to develop a biofuel business model in South Africa,” he said.

Prof Bux indicated that this project is broken up into three parts.

After the overview, Prof Bux delivered a presentation on the development of high biomass production system using open raceway pond. He then also gave insights into algae as a biofuels feedstock and the benefits of microalgae.

Prof Bux conveyed that microalgae have faster growth rates than crops, have higher lipid accumulation per dry biomass, have a suitable lipid profile, the ability to fix CO2, and can be cultivated on wastewaters with no need for productive agricultural land and no food security issues.

“Our approach is to use wastewater for cultivation of microalgae and for final effluent polishing to prevent eutrophication,” he said.

Prof Bux then delved into the benefits of microalgae cultivation using wastewater.

He spoke on the factors affecting biomass production, he emphasized on pond crashes and highlighted that this is the first large-scale demonstration plant in Africa for producing biofuels from microalgae grown on wastewater. ​

“This project contributes directly to the Sustainable Development Goals (SGDs) and circular economy which is imperative in terms of promoting green energy and in terms of the value proposition, there is revenue generation from the products (oil/biomass/residues), and protection of surface water from potential eutrophication,” he said. He also indicated that it is environmentally-friendly, a sustainable technology, and has the potential to create monetary incentives for companies by reducing their carbon emissions, (accrual of carbon credits).

Other presenters were Associate Professor Siaw Onwana Agyeman and Dr Adornis Nciizah who highlighted a cost-effective technology for the production of agricultural byproducts from waste. They explained that the dry microalgae residue after oil extraction is mixed with waste biomass such as bagasse, wood chips or crop residues to produce organic mats known as agri-mats. They also added that the use of agri-mats improves agricultural production as evidenced by improved crop yields.

Associate Professor Satoshi Watanabe Aichi from the Shukutoku University presented on the Development of Preliminary Business Model based on the production of biofuels and Agri-mat.

A robust question and answer then ensued which was followed by the closing remarks made by DSI’s Dr Henry Roman and JICA’s Mr Katsuya Kuge.

Dr Roman in closing said that DSI have grown human capacity in this area of work, not just on wastewater treatment but on agriculture as well and are looking at alternatives to how they can improve fertility of our soils.

“I think all in all, this is a successful project that we are proud to be associated with and also our partners from Japan, JICA, as said earlier on, is a great partner to the DSI,” he said.

JICA’s Mr  Kuge relayed his congratulations for a very fruitful, impressive seminar and commended the sterling presentations that were given by each presenter at the event.

The day concluded with a site visit with selected delegates to the Kingsburgh Wastewater Treatment Facility.