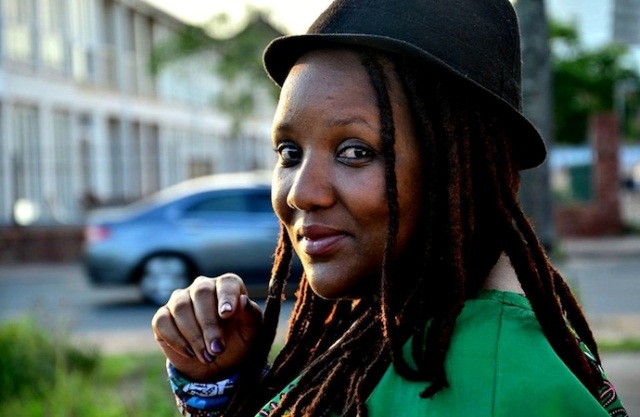 What most people throw away, Siyasanga Tundzi uses to make beautiful earrings and necklaces.

The 29-year-old explains that since childhood she always enjoyed making her own accessories, as she has always liked having her own unique style.

“My mother used to make traditional bracelets with beads and I would watch her. At some point I started helping and began making my own earrings. So from then it became a hobby for me to make my own accessories rather than buy them” she says.

Tundzi, a drama student, never intended to start an accessories business. Even when people starting asking her to make them earrings and necklaces like the ones she wore, it didn’t occur to her that she could make money from this. She never imagined that people would want accessories made from scraps of fabric. Her neckpieces are made out of waste fabric and matchboxes.

In the beginning the idea was just to sell to people in her community, but word of her talent spread fast.

“It was only after my friend Fezisa told me I needed to find a name for my creations, that I realised I could make a business out of this,” she says. She chose to call her business Hlubi creations.

The initial challenge Tundzi faced was a lack of funds with which to buy fabric, as she was a student with no income. She decided to ask designers in her area to give her the fabric offcuts they no longer wanted, and she collected the matchboxes she needed.

“People had no problems giving me their scraps. So my designs are all about turning unwanted things into beautiful pieces,” says Tundzi.

Today she is getting orders for her neckpieces from as far away as Port Elizabeth and Cape Town.

Having overcome the financial challenge, the next obstacle she faced and is still struggling with is keeping up with the increased demand for her creations.

“My dream is to own my own accessories store and employ other people so that I can make more pieces. At times some people place such big orders that I can’t accept them, as I work on my own,” she says.

In terms of marketing, Tundzi relies on social media and her clients spreading the word, but is hopeful that her business will grow to greater heights and she will earn substantial profits from it.

Tundzi is studying Drama and Production at the Durban University of Technology and would, one day, like to open a theatre centre in Bizana, a rural area in the Eastern Cape where she was born. She wants to teach rural children about theatre in the hopes that some might choose it as a career.

But right now Tundzi would like to see her accessories business grow so that she can create jobs for others. To see more of Hlubi Creations please go to  https://www.facebook.com/Hlubi.Hlubie