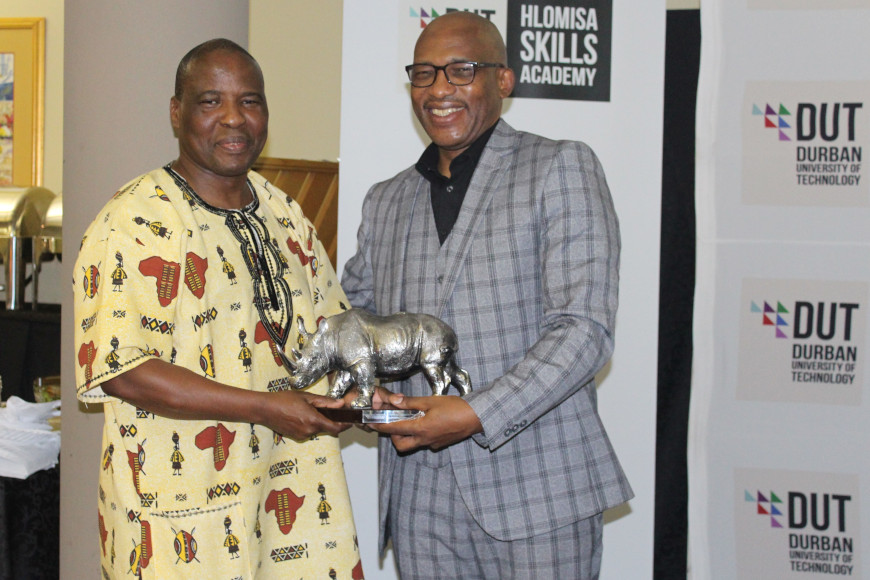 The Hlomisa Skills Academy is part of Grow-Our-Own-Timber programmes that DUT has implemented in the quest for deliberate and effective talent management.

Giving an overview of the Skills Academy, DUT Vice-Chancellor and Principal Professor Thandwa Mthembu said with this Academy, DUT will be looking into how to integrate programmes that focus on nurturing skills of young people and Alumni’s and further hope to also focus on nurturing other young people who many not be DUT graduates or students because as a public institution, the mandate is not so much about looking after ourselves.

“We are just custodians of a national asset that should work for all citizens of this country, which means we cannot only think of ourselves but think about this country as we are currently facing many challenges which some of us would characterise them as unemployment, poverty and inequality,” said Prof Mthembu.

He further eluded that with education being one of the oldest human activity and innovation, as a country the biggest challenge we are faced with is, how do we lead forward our young people using the basis of education.

“I believe there is so much more we could do especially for precautious young people who have shown the neck for leadership but have not abandoned the element of excellence in what they came to do in the university. I believe if we can focus on young people who have these two traits of focusing on excellence whilst they hold their skills in leadership, we would go very far as a country,” said Prof Mthembu.

The idea behind the DUT Hlomisa Skills Academy dates back to 11years ago, when the DUT Vice-Chancellor and Principal felt, leaders could do much more in their areas of influence.

The Hlomisa Skills Academy launch is set to launch many more programmes at DUT, that will ensure young people within the programme advance in their academics whilst not leaving aside the contributions they can make in their communities using their skills.

Giving the keynote address was University of Zululand (UNIZULU) Director, Prof Ratale Kgaphola, in his address, he spoke about the practice of leadership in the African context and the important role young people have in society.

‘We need academic and civil leaders who will use academia to reclaim the authority of knowledge generation and learning so that our young people will grow and can distinguish the differences between leaders” said Prof Kgaphola.

He added that this country is crying for leaders in its many spheres and those leaders should be leaders with courage. He encouraged the recipients of the DUT Hlomisa Skills Academy to take this opportunity and use it to resuscitate South Africa and its people.

Work Integrated Learning (WIL) Co-ordinator and recipient of the Hlomisa Skills Academy, Robert Thema who is studying towards his masters’ degree in Tourism Management at DUT said in terms of academics, he hopes to grow as a leader in order to be fully equipped in occupying strategic positions in society.

“I am very grateful for this opportunity, I want to be a leader that is knowledge based and this opportunity will help me to harness that. As one ascends through opportunities this will inspire other students and they are most likely to follow through.

The launch also included testimonials from graduates from the Central University of Technology (CUT) Higher Education and Leadership Skills Academy (HELSKA), where Prof Mthembu also formed part of the establishment of the programme. The CUT HELSKA graduates spoke immensely on their gained experiences and achievements, having been part of the programme and encouraged the recipients of the DUT Hlomisa Skills Academy to use this opportunity to foster change in society.