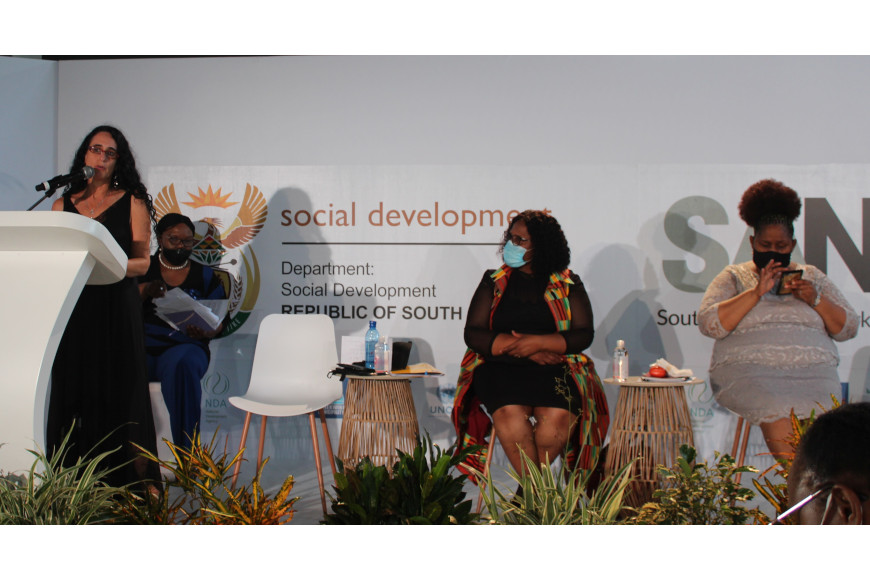 The National Department of Social Development officially launched the South African Network of People Who Use Drugs (SANPUD) at the harm reduction centre, the Bellhaven Memorial Centre, in Greyville, last Wednesday, 28 October 2020.

The Project leader is Professor Monique Marks who is the Head of the Urban Futures Centre at the Durban University of Technology (UFC@DUT).

Prof Marks is part of the team currently running the Durban COVID-19 Withdrawal Management Programme at homeless shelters in Durban.

Speaking at the event, Prof Marks said she was grateful of the support they have received from the political leaders and heads of departments, who took time off from their busy schedules to make the launch a huge a success.

“Many thanks to the Deputy Minister, MEC and Deputy Mayor, Belinda Scott you are included in the part of leadership we need right now in South Africa. You are appreciated more than I can possibly say right now and always. It is important for us to recognise the launch of an organisation like the South African Network of People Who Use Drugs. For me what SANPUD does, reminds us that every single one of us are fractured and that we are contradictory. That is the nature of what it is to be human. A network such as SANPUD will help us recognise who we really are as human beings,” said Prof Marks.

She said the launch of SANPUD is a recognition of not only a particular group of people who own up to using drugs but everyone who is fragmented, incoherent and inconsistent, including herself as the leader of the pack.

Prof Marks said in those moments of fragmentation, incoherent and inconsistency, people make choices which are sometimes good or bad.

“Let us recognise that in this we stand in solidarity with one another. For a ministry such as Social Development to launch SANPUD and this centre, that is incredibly significant. This is a big moment, Deputy Minister I felt like shaken up because you recognised all of us. I thank you from the bottom of my heart for that. I met Shawn from SANPUD in 2015 and we had a dream of making open substitution therapy available to South Africans. It did not look possible, It looked like just a dream but we fought really hard to make this a reality, with everybody that is here, it has been a difficult journey but worth walking,” said Prof Marks.

A recovering drug addict, Menzi Mavundla who is an artist and a musician, thanked Prof Marks and her team for not giving up on them while most people call them names and distance themselves from them.

He said lockdown was a blessing in disguise for him because he received help at the Withdrawal Management Programme at the homeless shelter in Moses Mabhida.

Mavundla got a chance to showcase his drawings and his singing talent along with other recovering addicts who provided entertainment at the event.

The Deputy Minister of Social Development, Bagopane-Zulu said stigma is a painful thing, that one will not know how painful it is unless he or she has experienced it.

She said to the drug users despite all the names they call them such as “Paras” but they should know that paradise is open to everyone.

“Even when they call you names that your parents didn’t give you. Those who judge you for a mistake or influence that they never cared to understand will reach you in heaven, maybe some will be locked outside and wonder how you got in,” said Bagopane-Zulu.

She thanked Prof Marks for her hard work and said without research, institutions of higher education and professors who actually believe in human beings, such projects would not be a reality.

“I have academics who care, who also put their research in context and not write to glorify their own names, but write to give evidence to people like us who draft policies and programmes, to make informed decisions. We really appreciate you, we appreciate each and every academic that continues to assist us and give us the body of knowledge,” she said.

Bagopane-Zulu also read a letter with a message of support from former President, Motlanthe who applauded Prof Marks and her team for demonstrating how alien spaces can be reshaped for human dignity and how policies can be re-centred around support to help people navigate their way in society.