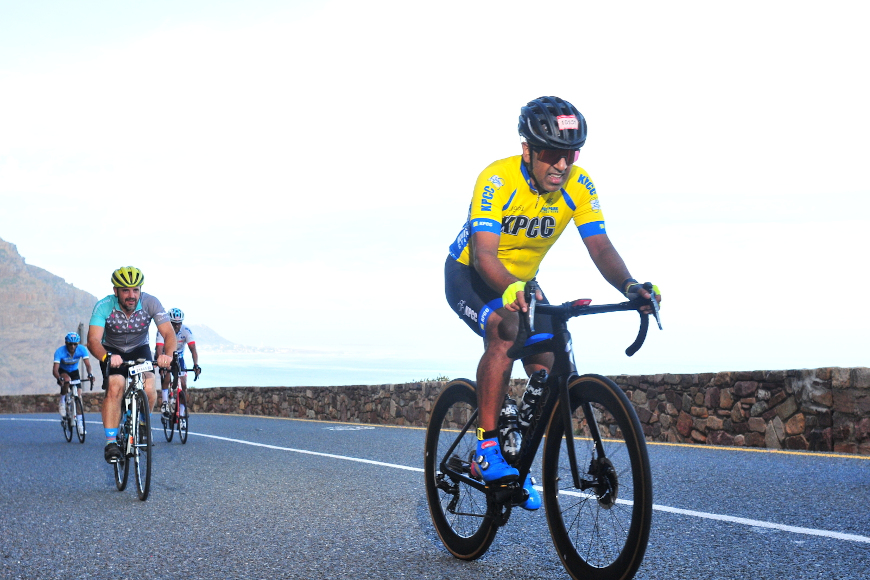 Professor Suren Singh’s immense love for cycling has propelled him to use his cycling skills to raise awareness for a social cause that is close to his heart. The charismatic and internationally recognized researcher (NRF B3 rated) who loves researching microorganisms and their enzymes, is all geared up to take to the road, in a bid to raise much-needed funds for CHOC (Childhood Cancer Foundation of South Africa) on 14 November 2020.

Prof Singh is the Executive Dean of the Faculty of Applied Sciences at the Durban University of Technology (DUT). He co-leads a research unit within this faculty that is the largest at DUT and a great deal of importance is placed on development within the research field he works in. This is a diverse Faculty which offers qualifications in Biotechnology and Food Science; Chemistry; Clothing and Textile Studies; Food and Nutrition Consumer Sciences; Horticulture; Maritime Studies; Mathematics, Statistics, Physics; and Sport Studies.

He explained more on the fundraising ride he is embarking on, saying that this year, one of the fundraisers for this organization (CHOC) is normally ridden at the 94.7 cycle race held in Johannesburg every year, wherein cyclists ride the 94.7km race in special suits in under 3 hours and then follow this with a second ride of the same course to honour the CHOC COWS and assist anyone and everyone to make sure everyone crosses the finish line.

In 2007, Jessica Madison Bain, was diagnosed with Neuroblastoma Stage 4 at the tender age of 10 months. On 27 February 2008, little Jessica passed away and her spirit and life inspired the creation of The Cows and her memory lives on through all The Cow projects underway. Her parents, Kerrin and Grant, decided to cycle the 94.7 Challenge in memory of little Jess and to raise money for CHOC. Kerrin’s colleague and friend, Cordi van Niekerk, heard about her fundraising project, and he and a group of friends got together and decided to raise money by cycling the race in cow suits.

Since the 94.7 Cycle Race is not happening this year, but since Cancer does not care about COVID-19, fundraising has to continue! I will be cycling 180kms for The CHOC Cows in an attempt to raise the much-needed funds for CHOC in the ride on 14 November 2020,” he said.

This group of cyclists, some ‘racing snakes’ some not so much, will start cycling around the city of Durban at 5 am, then head out North towards King Shaka International, Ballito, and Salt Rock with loops and return to eventually finishing on 180km. This should take roughly 8 hours – in the heat, but only with the little ones fighting cancer in mind.

As hydration is key with the predicted hot weather together with eating the right energy supplements the riders will have to ensure they are well prepared and stocked up on the day. Prof Singh joins this first time fundraising ride organized in Durban by Durban’s own Choc Cows entrepreneur, Iris Varty, representing both The Cows KZN Herd as well as Kings Park Cycling Club where Prof Singh is a member for over 10 years.

“Following my COVID-19 fundraiser wherein I raised almost R100 000 in April 2020 riding a virtual 200km, to supply sanitizer to schools in the region, I felt it was appropriate to do the same as a social responsibility initiative, especially for the children whose lives have been pegged back at such an early age, and in particular acknowledge many of my colleagues who have overcome cancer and are fighting cancer.

Also, this coincided with October Breast Cancer Awareness Month, a growing health challenge amongst many of our women far greater than we perceive, which deserves acknowledgment,” he stressed.

When asked about his preparation for such an intense ride, Prof Singh said that he rides six days a week and an average of 300 to 400km a week, having covered over 14 000km for the year already which has prepared him well to ride this event on a social level. In terms of diet, Prof Singh revealed that it is based on a balanced carb – high protein diet and has lost 4.5kg since February 2020 with a resultant increase in power to mass especially when climbing.

His love for sports transpired from his school days, as a track athlete at school and early university having earned colours for several years. He then became a road runner, completing several marathons, including the Comrades in 2002.

“I took to cycling in 2004, as a ‘less impact’ option and never turned back. The sport has remained a drug since,” he said.

He urges people to support this worthy cause and show support by making donations to:

Pictured: Professor Suren Singh is all geared up to cycle on 14 November 2020 for CHOC.