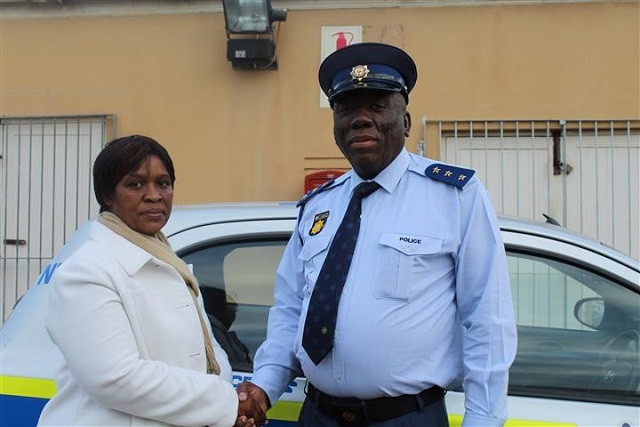 Meet Tongaat’s new corporate communications officer, Captain PZ Ngwane who was appointed to the post on Monday and took over from W/O Manisha Maharaj-Marie on June 23, 2017. Tongaat SAPS welcomed a new communications officer on Monday, who had been previously serving at Mayville SAPS for the past 15 years under the same post.

Captain PZ Ngwane was appointed to the post on Monday and took over from W/O Manisha Maharaj-Marie. Ngwane joined the police force in 1986 and has served for decades at Mayville SAPS of which 15 years as a communications officer.

“I was delighted when I received the good news of my promotion on Friday, June 12 from the cluster commander Lieutenant Ngobeni. I feel very honoured to be given an opportunity to be a captain at Tongaat SAPS as a subsection commander: corporate communications and marketing,” he said.

Cpt Ngwane’s core functions include managing all media liaison as well as internal and external communication efforts in the province on behalf of the province head, to manage, co-ordinate, advise and liaise with SAPS management, other government and non-governmental organisations with regard to external and internal co-operate image, marketing and public relations.

“It is very exciting and it is a hard-earned opportunity. I am looking to make new developments and raise the Tongaat station to greater heights,” said Cpt Ngwane.
The father of three girls hails from Newlands West and possesses a Diploma in Management and is currently completing his BTech in Management at the Durban University of Technology.

“Over the years, I have acquired the skill of working as a leader and working in supervisory roles, while managing human, physical and financial resources,” he said.
He described himself as creative, an individual who is able to take initiatives and work independently, always willing to learn and works well under pressure. “I am organised and able to plan, prioritise and coordinate excellent interpersonal and communication skills,” he added.

Cpt Ngwane told the Phoenix Sun that he wanted to be a policeman after completing his high school education as he had witnessed high levels of crime in his community. “When I received that opportunity, I knew I would make a change and contribute to the world. I also started out with a passion in Accounting and I have fulfilled that passion by pursuing my Bachelor of Technology in Management which has equipped me with necessary skills to be in managerial positions,” he said.

Cpt Ngwane said he admires that the fact that he can use his skills and innovative ideas to bring about change within the community and also love the fact that he gets to work with community members and people through media channels. Being a cop has taught Cpt Ngwane to appreciate his life and make a difference to other people. While the job comes with challenges and risks, he alluded that he has been placed in risky lines of duty when he was a younger policeman.

“It was exciting as well as challenging. Also, the expectation for me to carry my ideas as a cop even off duty has been quite challenging as I also love to balance my work life with family life,” he said.
His message to the people of Tongaat is that they must expect exciting ideas as well as a change from Tongaat SAPS in the way marketing and communications are perceived within the community. “I am ready to work with communities, liaising with community groups and individuals addressing root causes of crime,” added Cpt Ngwane.