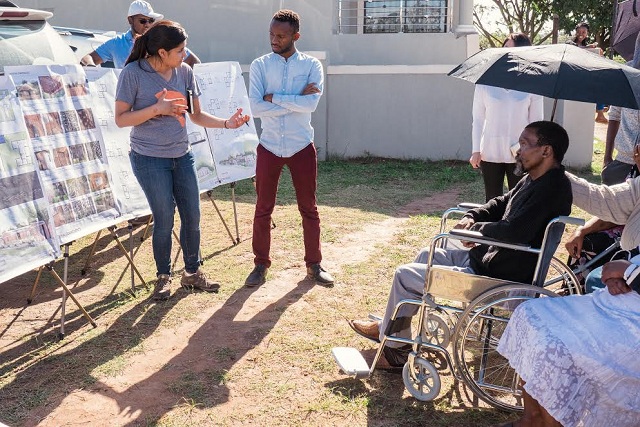 Harnessing the creativity of his community origins, Wandile Mthiyane, founder of Ubuntu Design Group and Andrews University Master’s student is seeking funds to assist in building the group’s very first home for a family of an unemployed, disabled couple.

Mthiyane, 22, a former DUT Town and Regional Planning student moved to the United States of America in 2012 after being awarded with a five-year scholarship to pursue a triple major in Architecture, Town Planning and Civil Engineering at the prestigious Andrews University in Berrien Springs, Michigan. He was also awarded just over R40 000 ($5000) from the University as well as just over R49 000 ($6200) from the American Embassy.

The KwaMashu, Durban, native was then brought together with other young bright minds from all over the world by World Merit 360 in New York to discuss and brainstorm ways to effect global change in alignment with the United Nations’ Sustainable Development Goals. This task fitted well with Ubuntu Design Group’s work which aims to effectively develop communities around the world. The project, which is actively seeking to reignite the spirit of Ubuntu (I am because you are), has won several international awards.

Using his architectural skills, talents and his devout Christian principles, Mthiyane saw a need to reach out to the Mtshali family which consists of Mrs Mtshali and Mr Mtshali, who are both physically challenged, and their 15-year old son, who has since been taken in by relatives.

Mr Mtshali who, became bed ridden after his legs completely failed, and his wife live in a small one room shack in Umbumbulu, KwaZulu-Natal. When Mthiyane and his fellow peers from Andrews University visited the family, they were not only concerned about the small, narrow passageways and missing street lights in the community in which the shack is situated, they saw an opportunity to work with the local residents to best redesign the streets to open up space along with redesigning their homes/shacks. It is then that the group decided to collect and donate funds to build a new home for the Mtshali family.

“The whole idea is about Ubuntu. What better way to put my architectural knowledge to good use than to respond to my social moral obligation which is to give back to the community. Architecture is a frame and people are the bigger picture. If architecture can destroy, surely it can build as well,” said Mthiyane.

The construction of the Mtshali family house is set to commence in March 2017. This house will have enough commercial space so that the family can sustain itself. Although half the amount needed has been donated by Andrews University, the other half is still short. The Buy a Brick campaign, which calls on all businesses, construction companies and individuals around the world to purchase a brick towards this home is currently active. For those who are will to donate can either buy building material or email their invoice to Wandile Mthiyaneat wandilemthiyane94@gmail.com or https://www.crowdrise.com/dashboard/wandilemthiyane/buy-a-brick-build-a-home-the-mtshalis-family .

– Buy a Brick: https://www.crowdrise.com/dashboard/wandilemthiyane/buy-a-brick-build-a-home-the-mtshalis-family.
– Buy construction materials such as concrete blocks (there is a shortage of 2500 and 60 bags cement). Email of the invoice for Ubuntu Designsto either pick up or the to have it delivered @ info@ubuntudesigngroup.com/wandilemthiyane94@gmail.com.
– For those who do not have internet, donate through e-wallet/Instant Cash to 081 053 4519.

Pictured: Wandile Mthiyane (right) and Edith Garcia (left) during a presentation of the project to the Mtshali family. Pictured in the wheelchair is Mr Mtshali, one of the beneficiaries of the project.