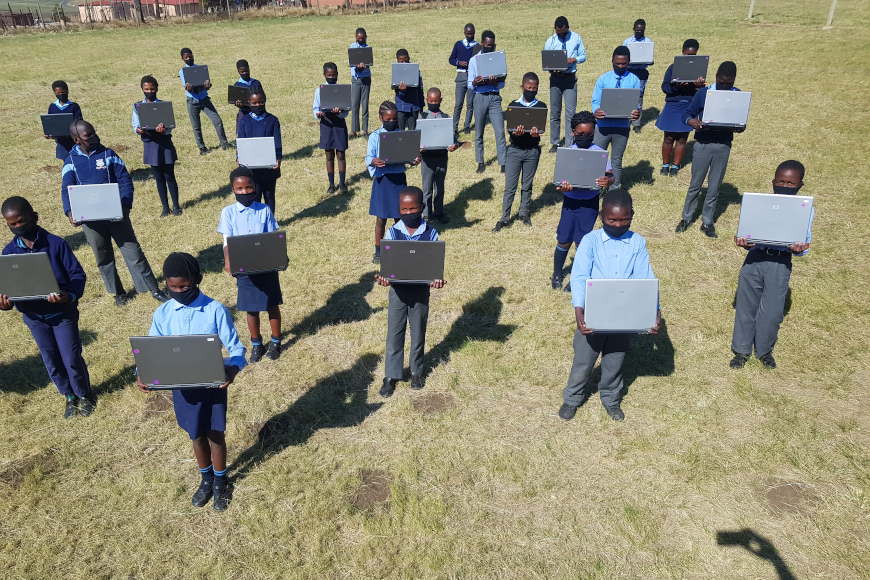 Mkuzo is the founder of Urglobal Mentoring Network, which is a mobile computer training solution that utilises a school’s infrastructure to teach computer skills to students, teachers, community leaders and members in rural communities.

She has been ensuring earmarked Urglobal schools in the Alfred-Nzo District, OR Tambo District, Urglobal communities in the Eastern Cape and KwaZulu-Natal have access to technology across South Africa.

Mkuzo spoke more on her background explaining how she became involved in such a project.

“I come from a rural area called Kubha in the Alfred Nzo District of the Eastern Cape. I was not born into privilege but I had opportunities that have awarded me exposure into how those with wealth and status live. Being in the middle and seeing both sides, those who have very little and those who have a lot made me want to do something to even the play field. This is the reason why our programmes are specifically targeted to rural communities. Our aim is inclusion regardless of location and we believe that access to technology is the start,” she said.

Mkuzo further indicated that her company is in partnership with SAB Foundation, the precise donations who have helped make the help a reality.

“Urglobal is one of the 2019 SAB Foundation social innovation awards finalists, which were given seed funding. With some of the funds we have received 21 laptops, a drone, virtual reality head-sets, google assistant and ARDUINO UNO advanced kits. Apart from the seed funding received SAB Foundation has also provided a further R150,000 towards marketing, business mentorship and a business coach. We normally have rotation sessions on a monthly basis with a mentor and coach,” she said.

Explaining further on the ARDUINO UNO advanced kits, Mkuzo said that the kit gives exposure to coding skills, this makes both students and community members exposed to what it means to code technology equipment such as robots. She said that this means that they can understand from the end-user perspective and developer’s perspective creating a holistic picture for them which are the type of skills they have no access to.

Mkuzo stressed that DUT also plays a part by helping with facilitator training. “We are in discussions to see how we can take it further and increase community impact with DUT being a university of technology,” she said.

She explained that she and her team spend 30 hours a year per learner for beginners, 15 hours for intermediate and 15 hours for advanced and then monitor them after they leave the programme. “We normally take a maximum of 35 learners per class at a time and maximum of three groups per day,” she said.

She said that she and her team are working on piloting a separate programme focused on a digital after school learner enrichment programme with the use of tablets. “The pilot group are students and teachers who have been part of Urglobal’s technology training programme,” she said.

Mkuzo stressed that her main goal is to create a national footprint in rural communities. “Our mobility methodology ensures access and inclusion for rural communities and schools in the digital era. We are able to reach students and communities no matter their location,” she said.

She is also happy to convey that she had the opportunity to present the programme to the Eastern Cape Department of Education with the MEC, Mr Fundile Gade and his team who have informed her that they are having discussions with the School of Government: School, Publics, High School and curriculum Chief Directorate to see how the programme can be included.

Pictured: Pupils at one of the schools who were the recipient of laptops.