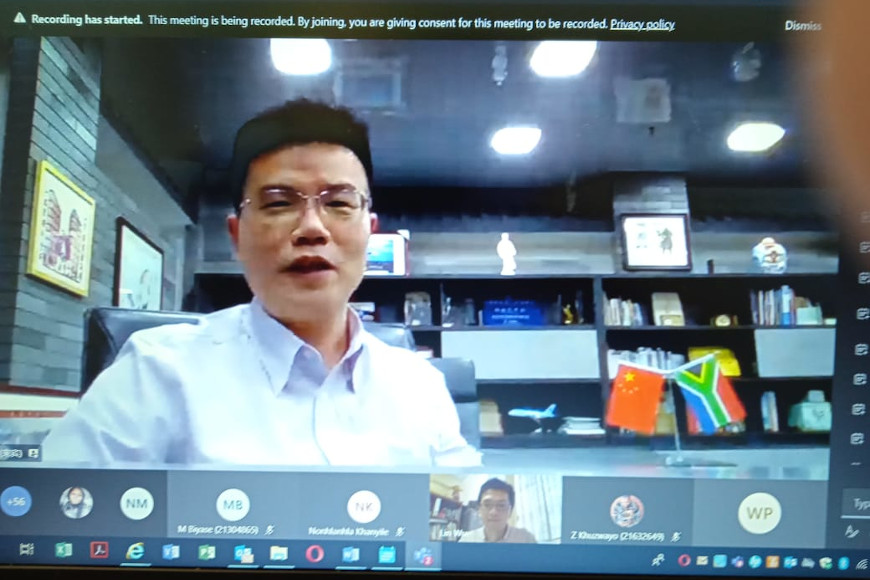 The Durban University of Technology (DUT) in collaboration with the DUT Confucius Institute and the Entrepreneurial Desk hosted an Entrepreneurial Webinar (A Rainbow Bridge to China and Chinese Opportunity) on Thursday, 19 November via Zoom.

The aim of the webinar was to showcase the entrepreneurial possibilities for the institution students in the period of the COVID-19 pandemic, and to also share some of the phenomenal experiences from current students who are affiliated to the Confucius Institute.

The Confucius Institute (CI) at DUT was officially established on March 26 2013, under the co-witness of the visiting Chinese President XI Jinping and the previous South African President Jacob Zuma, during President XI’s first diplomatic visit after his inauguration. The partner university to establish DUT CI is Fujian Agriculture and Forestry University (FAFU) from Fujian Province, China.

It also works as a bridge to promote cooperation between DUT and the Chinese Universities to advance collaborations in the various fields and has been dedicated to Mandarin plus vocational and technical training, contributing to the economic development of local communities by exploiting the discipline advantages of DUT and FAFU.

The guest speakers at the event was Mr Calvin Ming Yan, who is the Director of Dongguan Economic and Trade Representative Office in South Africa, and General Manager of the Dongguan Commodity South Africa Display Centre.

Welcoming the guests to the webinar was the Director of the DUT Confucius  Institute, Frank Lin Wu, who also served as the moderator of the event.

He expressed his heartfelt gratitude to the four speakers, thanking them for sharing their views on China as well as Mr Yan for sharing more on his business relations and business and entrepreneurial opportunities that exist. He also thanked Nonhlanhla Khanyile from the DUT Entrepreneurial Desk and Nontokozo Ngcobo from the Midlands Entrepreneurial Centre for their partnership with this event.

Addressing the webinar guests, Khanyile welcomed the DUT community and thanked everyone for joining in to the session.

“To just a share a bit of history, we established in 2018 and this was still the baseline study for DUT in terms of understanding the entrepreneurship model that we were to establish and implement in terms of supporting our student entrepreneurs. We were fortunate that there was a cohort of students that we started to engage and support in terms of their business development. We had a partnership with Lin WU where he introduced to us the content for our students to participate in the China expo in Dongguan in 2018. We were fortunate enough to be supported by DUT management and bale to travel with Ngcobo, and few students, who were able to receive tremendous exposure while we attended the expo,” she said.

Out of the study, going forward, she stressed that the entrepreneurial students who were registered on their programme, were advised to attend mandarin language training session, which they are planning to host sometime next year, 2021.

Adding to the conversation on international business prospects, Mr Yan spoke on new business opportunities with China on the Maritime Silk Road.

He firstly gave an overview on Dongguan, which is a famous manufacturing city in Southern China, close to Hong Kong, Guangzhou and Shenzhen.

“Though thousands of miles apart, Dongguan and South Africa have always maintained close trade and economic ties.   In 2013, Chinese President Xi Jinping put forward the important initiative of jointly building, ‘the Belt and Road’, winning positive responses from countries along the Maritime Silk Road route.  Since 2015, there were many conferences and meetings between the leaderships of South Africa and China, which reinforced our confidence to promote business between the two countries,” he said.

He further relayed that in August 2016, a Memorandum of Understanding (MOU) was signed by the Premiers of Guangdong and Kwazulu-Natal in Durban, creating a lot of opportunities for business people.

He also indicated that China works closely with TIKZN, as well as that China is the biggest trade partner of South Africa in 10 years.

“The trade volume between Dongguan and South Africa also boomed in recent years. In 2015 for instance, the mutual trade recorded 430 million USD, an increase of 34.4% year on year. Specifically, total export was 290 million USD, increasing by 3.2%; total import was 140 million USD, up by 276.9%.

He also spoke on the Dongguan Commodity South Africa Display Center which has opened six showrooms in Johannesburg, Pretoria, Polokwane besides Durban.

Mr Yan expressed that 11 November is now a special day in China for the E-commerce, saying that in five minutes, the sales amount up to 30 billion RMB, which converts to more than 70 billion.

“The most word I heard for the new generation is opportunities.  Let us catch this golden opportunity to make a good design of our career,” he said.

Panellists Ntuli shared his story on China and how he gained a deeper understanding of China and the Chinese language. He focused on all the wonderful experiences he had enjoyed, learnt and how he grew as a young man meeting and interacting with people from different places with different cultures from around the world.

Mkhulisi shared with her experience learning Mandarin and the Chinese Culture.

“It was for a very simple reason, I liked how it sounded and there were too many movies I wanted to watch without having read the captions. Last year, I started to learn about the Chinese culture. My teacher taught us how to write Chinese characters, speak Chinese, and introduce Chinese landscapes. Everything seemed so hard that I secretly wanted to give up, but after seeing students that were doing level 2 at that time gave a little hope that it’s possible,” she said.

After two semesters of hard work, she passed the HSK Level 3 exam and successfully got the opportunity to participate in the winter camp in China last year.

“I have shared my trip to China probably a hundred times but I still get goose bumps every time I talk about it, I guess it still feels like a dream,” she said.

The last speaker of the event was Mangalibi, who spoke about his journey since he began studying last year.

“I started learning Mandarin in July last year, after I was introduced to the Confucius institute by a friend of mine. She had been to the Winter Camp in China the previous year, so that was also one of my motivations, so I began learning and for the next few months I attended twice a week. The classes were loads of fun. We did various things like, listening to songs, but my favourite part was writing the characters. It felt like art, and the best part was that I could actually understand it,” he said.

He also spoke of the highlight of his trip to China which was dragon boating.

“This was a first because I had never been on any type of boat open water, and also because of the teamwork it involved,” he said.

Lin WU thanked all the speakers for sharing their experiences on China, also saying that next year, the CI will continue to promote more Chinese Training programmes, together with DUT Entrepreneurial Centre and Desk, so that students and local communities could have more chances to access the opportunities of innovation, entrepreneurship, study, and career by learning Mandarin.

Pictured: Panellists at the Entrepreneurial Webinar.