PROF MTHEMBU SYMBOLIZES 2020 AS THE BEST AND WORST OF TIMES

PROF MTHEMBU SYMBOLIZES 2020 AS THE BEST AND WORST OF TIMES 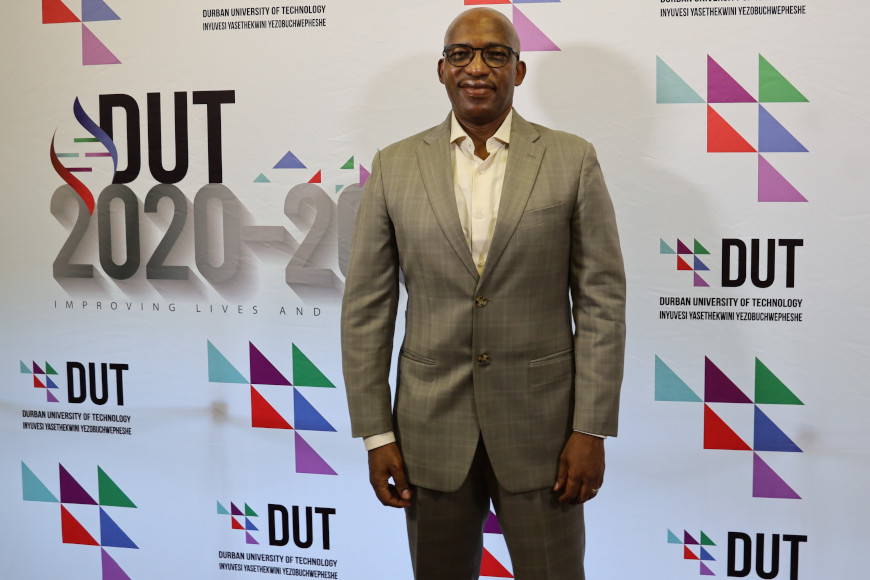 As the year 2020 is about to come to an end, Durban University of Technology Vice-Chancellor and Principal, Professor Thandwa Mthembu recorded his year-end message at his office, in Steve Biko Campus on Tuesday, 15 December 2020.

He began his message by reading an abstract from a book by Charles Dickens, titled A Tale of Two Cities.

He said the academic year 2020 at DUT started very well, rather unusual as the institution started on schedule on 3 February 2020, there making it the best of times. A few weeks thereafter there was lockdown, towards the end of March 2020 which Prof Mthembu referred to it as the worst of times for the whole country and the whole world.

“It was something very unusual which forced all of us as a result of lockdown to stop so many things we had been used to doing in a particular way. It forced us to find new ways of getting on with our business, but it was also a time of great wisdom in the manner in which management, Exco of council, council itself, other stakeholders; SANEX, Executive Management Committee grappled with the challenges we faced because of lockdown. We learnt quite a lot and implemented quite a lot of things and I do know that some of us may have not believed in so many things we tried to do, under very trying circumstances, without much time we had in our hands, but we did the best we could do during this difficult period,” said Prof Mthembu.

Furthermore, he stated that it was the best of times because just at the end of 2019 Council approved DUT’s Envision 2030, whereby the University started the year with some aspects of implementation of Envision 2030 and DUT’s Living Values Project was implemented.

Prof Mthembu said he had begun to see a number of structures, students referring to all aspects of DUT’s Values and Principles when they have issues to put on the table. Transparency, Honesty, Integrity, Respect, Accountability, Fairness, Professionalism, Commitment, Compassion, Excellence, Prof Mthembu said he has seen that in many emails and documents that have been exchanged among the university community.

“So, I am excited that even though the year was a challenging one, aspects of our Envision 2030 have begun to be imbedded in the whole circle of the University and producing what we call the DUT Way. The return of our students and staff from May 2020, did usher in a season of light, a season of hope that even though in March it looked like the worst of times, we began to see that we could finish the academic year. We are in the last stages of our academic year 2020, even though it goes into the first few weeks of January 2021,” said Prof Mthembu.

According to Prof Mthembu, DUT saw the best of times highlighted by the Times Higher Education World University Ranking 2021 where DUT was ranked among the top 500 universities in the world and became one of the top 10 universities in South Africa. He passed his gratitude to staff members and students who demonstrated their belief in the university itself even though many thought it was facing the worst of times.

The Student Representative Council (SRC) leadership was commended by Prof Mthembu for ensuring that DUT moves away from the past and see 2020 as the beginning of focus on excellence that made DUT as one of the top 10 universities in the country.

He thanked the COVID-19 Response Task Team for their dedication in containing the rate of infection in the University. He said, he has trust in the team that even though the country has been hit by the second wave of infections they will be able to contain the spread and ensure that DUT does not become one of the super spreaders of the COVID-19 virus.

Prof Mthembu thanked students, staff and many other stakeholders for ensuring that DUT is up and running during the challenging year.

Given the festive season restrictions, Prof Mthembu said he hopes it will give the DUT Community more time to bond with their friends and families. In conclusion, Prof Mthembu said that he hopes 2021 would be the spring of hope and the season of light, that will signal the start of the age of wisdom and the best times of greatness.