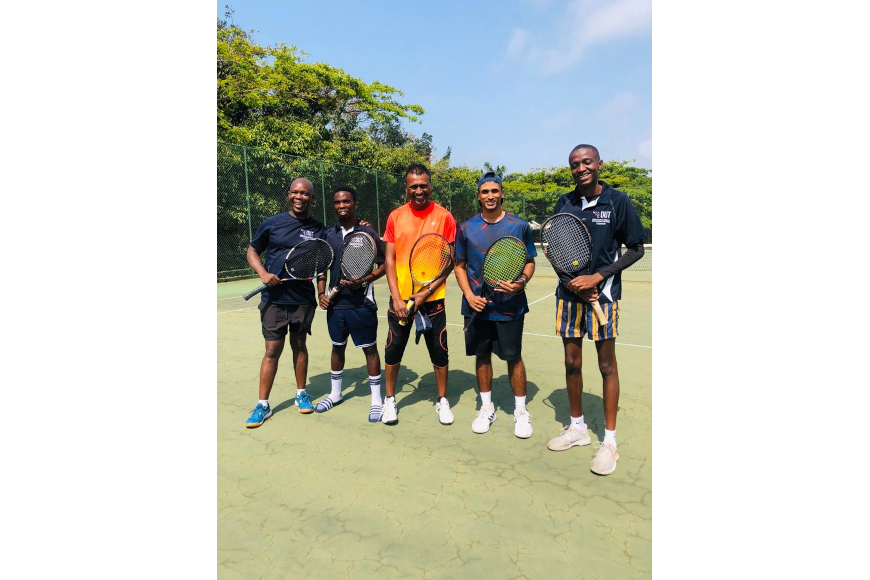 Flying the sporting flag high are the dynamic members of the Durban University of Technology (DUT) tennis team, who have won the recent Open Men’s Doubles League 2022 for the first time for DUT. DUT entered the Open Men’s Doubles League, which is in the format that allows staff and students to play alongside each other. The Open Men’s Doubles League had five other teams in this division, which included Umhlanga TC, Glen Ashley TC, Durban North TC, La Lucia TC and Cowies Hill TC. Since the DUT tennis team had never played league tennis previously, they had to start in Division 5. DUT’s first tennis pairing team in the league, S’fundo Mthembu and Keenan Pillay, spoke of their dynamic experience.

Mthembu, a second-year student in ICT: Business Analysis, was glad to be part of this team and very proud of what they had achieved. However, he did make mention that playing as the number one duo in the league was added pressure because all eyes were on them, but he also said it was a good kind of pressure any player would need.

“I would encourage other staff to play tennis because we do need the tennis club to grow and we need to have new members to ensure that the club continues running,” he replied. Pillay, who is currently studying towards his Advanced Diploma in ICT, said that his highlight from the Men’s Doubles Open League 2022 was the atmosphere they had at every fixture.

One of the seasoned team players is Jerry Sylvester, a multimedia officer in the DUT Multimedia Department. He chose to join because he felt he could add value to the young team since he already had vast experience with playing league and wanted to inspire the very eager players who were at the club. “I am so thrilled for the DUT tennis team and the university as well. This is a great accolade for us because it puts us on the map for the ETA (Ethekweni Tennis Association) since people have suddenly noticed us and are now asking, ‘Who is this DUT team?’ We worked really hard and pushed to get this title. Next year, we will be even stronger since we have some highly ranked matriculants who indicated that they will be coming to DUT,” he commented. 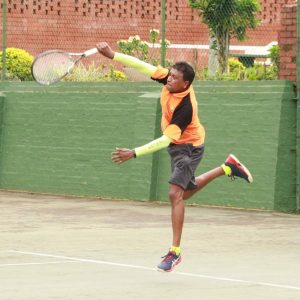 Pictured: Jerry Sylvester in action at one of the matches.

He said that the DUT team won all their allotted fixtures, which were either home or away games. Sylvester indicated that the home games were played at the Westridge Tennis Stadium and this is where the team also trained since DUT did not have its own tennis courts anymore.

“Some of the games were tough but we showed resilience and powered through due to our mental strength. Our hardest game was against Glen Ashley due to their home advantage, but we still won that fixture. Due to us winning all our fixtures, we were offered to go to the play-offs (i.e. we were given the opportunity to play against a team two divisions higher). We played Coastal Breeze from Glenwood and in an unprecedented move, were able to beat them in straight sets. So next year we will play in the third division due to our double promotion,” he said.

For Sylvester, this year has been quiet phenomenal since just over a year ago, he had a horrendous sporting accident when he broke his ankle and snapped his ATL ligament while playing volleyball.

“It was so serious that the orthopaedic surgeon said that I may have to end all competitive sport. Thankfully, with the grace of God and top specialists, I was able to recover very well. It went so well, in fact, that this is my third league title for this year and I’m so grateful for my full recovery,” he said. He further added that it means that next year they have a wonderful platform to challenge the third division. In addition, winning this league is great preparation for the Top Guns Tournament in November and also the USSA tournament to be played in Johannesburg in early December.

Sylvester gave thanks to the DUT team and the coach for welcoming him with open arms to the DUT club and for also allowing him to play freely and express himself on the court.

“It’s through his mentoring and backing that I have been able to take my style of tennis to a higher level,” he said. The DUT coach, Bonginkosi Maphumulo said that he was grateful to be part of the DUT tennis club family. “I am so happy to win the league for DUT. The University has never participated in the ETA League before. I’m so grateful to be the first coach to make history. I just want to thank the Sports office for always supporting us and making sure that our needs are met,” he said. He expressed the importance for DUT staff to participate in sports.

“If we can have many of the staff members playing tennis we will always maintain a strong team for DUT. That will make my job easier and we will always have a team,” he said.