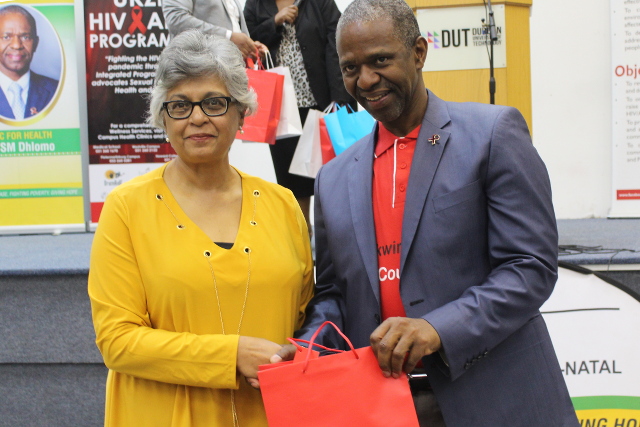 Ahead of the 21st International AIDS Conference, the KwaZulu-Natal Department of Health, together with the four KZN universities (DUT, UKZN, MUT and UniZulu) and the eThekwini Municipality, launched the Higher Education on Friday, 15 July 2016.

In his welcome note, Civil Society Chairman, Siyabonga Nzimande, said it was time for people to make sure that they made healthy choices and decisions. “It’s evident that there is a sexual hunger and the way we feed our hunger will determine who we become. Let’s make sure that the decisions we make are the right ones; and that those decisions are healthy ones. Let’s feed our hunger with the right things,” said Nzimande.

He further added that it was time for South Africa to have positive role models and for parents to face the reality that children as young as 14 years are engaging in sexual activities. Highlighting the need for unity between universities and society in fighting and tackling issues related to HIV/AIDS, eThekwini Municipality Speaker, Cllr Logie Naidoo, said it was time to not only show support for the cause, but unite in striving for an AIDS free and healthy generation. “Today’s launch is an important milestone. These are the programs we need in our society to enrol change,” he said.

KZN MEC for Health Dr Sbongiseni Dhlomo said it was evident in the province that there was a need for such an initiative with the province having the highest new HIV infection rates and the highest overall prevalence of infection with a large number of youth between the ages of 18-24 affected and infected the most. “It’s worrying that people who are infected the most are youth and who are in eThekwini. This cannot be good because this is where the three higher education institutions are. Universities are the best environments to educate about HIV, STIs, TB and healthy living,” said Dr Dhlomo.