‘The Magician’s Touch’- a film by a group of students from the Durban University of Technology’s (DUT’s) Video Technology Department who call themselves the ‘DUT Skywalkers’ won Best Musical Score at the recent Durban leg of the international 48 Hour Film Project (48HFP) hosted by Benchfilms.

The students were assigned the thriller or suspense genre. Their prop was Any Dessert and their line of dialogue was “remember the last time you said that.”

‘The Magician’s Touch’ tells the story of Lelona- a singer who talks to a serial killer magician that preys on women on online dating sites. 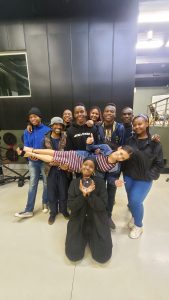 The film was screened at Gateway’s Ster-Kinekor theatre in October 2022 in front of an audience of filmmakers, and the students’ friends and families.

First-year student, who was part of the production team, Sokhela said: “It feels surreal to me, especially because I was doing it for fun and to have an experience of working on projects that are not from school. Although I knew there were awards I wasn’t expecting to win any of them, especially because there were also big companies with big budgets forming part of competitors.”

Second-year student, Lunganga who learnt to keep things calm under pressure during filming, commented: “I am feeling great, as it is my first award. I feel motivated to do more for next year.”

Video Technology lecturer, Lance Lutge who was at the forefront of assisting the students secure funding and equipment for the project ,said his department always does its very best to bring opportunities like the 48HFP to students and it supports students who enter these competitions.

“We are so pleased with all our students who entered this tough competition, against tough competitors, and the films they were able to conceptualise, script, film, and edit in the very short space of only 48 hours. This is a massive achievement on its own. It is a cherry on top for our department and we are very proud of their achievement,” said Lutge

Pictured: The DUT Skywalkers, the team behind the award winning film, ‘The Magician’s Touch.’ (Image supplied).