VIOLENCE IN KWAZULU-NATAL: OUR RESPONSE AS THE INTERNATIONAL CENTRE OF NONVIOLENCE AT DURBAN UNIVERSITY OF TECHNOLOGY

VIOLENCE IN KWAZULU-NATAL: OUR RESPONSE AS THE INTERNATIONAL CENTRE OF NONVIOLENCE AT DURBAN UNIVERSITY OF TECHNOLOGY 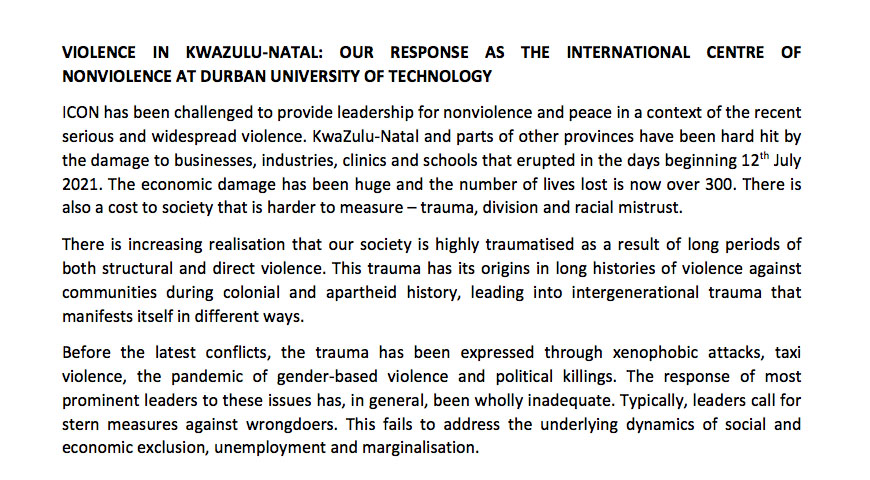 ICON has been challenged to provide leadership for nonviolence and peace in a context of the recent serious and widespread violence. KwaZulu-Natal and parts of other provinces have been hard hit by the damage to businesses, industries, clinics and schools that erupted in the days beginning 12th July 2021. The economic damage has been huge and the number of lives lost is now over 300. There is also a cost to society that is harder to measure – trauma, division and racial mistrust.

There is increasing realisation that our society is highly traumatised as a result of long periods of both structural and direct violence. This trauma has its origins in long histories of violence against communities during colonial and apartheid history, leading into intergenerational trauma that manifests itself in different ways.

Before the latest conflicts, the trauma has been expressed through xenophobic attacks, taxi violence, the pandemic of gender-based violence and political killings. The response of most prominent leaders to these issues has, in general, been wholly inadequate. Typically, leaders call for stern measures against wrongdoers. This fails to address the underlying dynamics of social and economic exclusion, unemployment and marginalisation.

A key problem in such contexts is that an initial provocation evokes a more violent response. Such violence will simply intensify the potential for catastrophe, and this was evident in KZN.

When the initial provocation of looting, arson and racial threats took place, the South African Police Services failed completely to address it. This led directly into the rapid emergence of community policing. There was often the open display of weapons. In some areas this led into racially targeted abuse, assaults and killings. This has prolonged the social and economic damage. It has further inflamed racial tensions, leading to threats of further attacks.

In other areas, community policing was much less racialised and without violence; this was effective and demonstrated the capacity for community mobilisation that was seen during the anti-apartheid struggle. Another positive development was that the ending of unrest was swiftly followed by open demonstrations of care and healing, as volunteers throughout the province set to work to clear, clean and tidy vandalised areas. There have also been initiatives that bring food to people, that support communities where shops and clinics have been closed and where ATMs were destroyed in the looting. It is now a critical opportunity for us to build on the strengths of such approaches.

In reality, we do know that there are gentle and effective measures that can move us – not one or other group, all of us collectively – ahead on these issues. We now know clearly that the estrangement of communities from each other (itself a goal of apartheid) has not been addressed and is highly dangerous. There are immediate ways ahead that start at that point.

Professor Monique Marks, of the Urban Futures Centre at Durban University of Technology, has called for what she has termed Platforms of Truth, forums that open communication within and between communities. People have to find ways to reconnect through this, and, in the process, perhaps restore hope in themselves.

The response by ICON

Our first response has been to start a process of online dialogues (the first was on 5th August). These dialogues are intended to be just that – not a panel of invited speakers, but simply helping people to connect with each other at a deeper level of experience. For example, simply exploring what people were feeling through these events, in a group of rich diversity, was truly helpful and strengthened the sense of empathy – and brought a feeling of relief and growing confidence that we can address these issues. The dialogue will be followed by others, each building on the learnings from the previous one.

This dialogue has connected with other initiatives. For example, one of the alumni of our Leadership Programme, Nonkululeko Zungu, initiated a forum in the Ntuzuma township on 28th July that included a wide range of local people and opened up significant new channels of communication in the area. ICON has now been in touch with facilitators of other dialogues in the region; they are themselves a rich resource.

Secondly, ICON had already planned a short course for developing facilitators working through urgent social issues. This will start in September 2021. ICON has excellent community contacts in this province and beyond and we are inviting people – a diverse range of community activists, people with relevant teaching experience, whose capabilities and commitment have already been demonstrated – to join us in strengthening skills. This includes skills in handling violence and managing conflict, ways of enabling people to communicate effectively across differences and to learn from communication with each other. One element will build on the strengths shown by facilitators of recent initiatives by bringing them into the course to share and reflect on experiences.

Our third initiative builds on our existing work in the area of leadership development. Since 2013 we have been running a programme with the assistance of other DUT staff, ACCORD and, more recently, WESSA, the environmental organisation. In 2021 we decided instead to conduct an evaluation. We had an excellent response, and those who participated indicated that our approach was on track; they wanted more in the area of managing conflict.

ICON’s current proposal is that those who complete the course for facilitators present leadership programmes, perhaps over a six week period, in various areas of the EThekwini Metro. We are currently seeking the funding to make this possible.

Beyond this, there is a need for an ongoing process of collaboration across dialogues with a similar vision, across KwaZulu-Natal. This is not a role for ICON itself – we will focus on enabling dialogues and developing the skills and theory related to those. The role of developing facilitators who can both embody nonviolence and enable the building of peace, in a context of structural violence, is an essential task for ICON.

In the meantime, we call on political leaders to exercise restraint and in no way to exploit racial tensions. It is now more evident than ever that increased violence intensifies inequalities and exercises damaging effects on society. It further disadvantages the black, poor, and other marginalised groups of people. People have been traumatised; we now need healing.